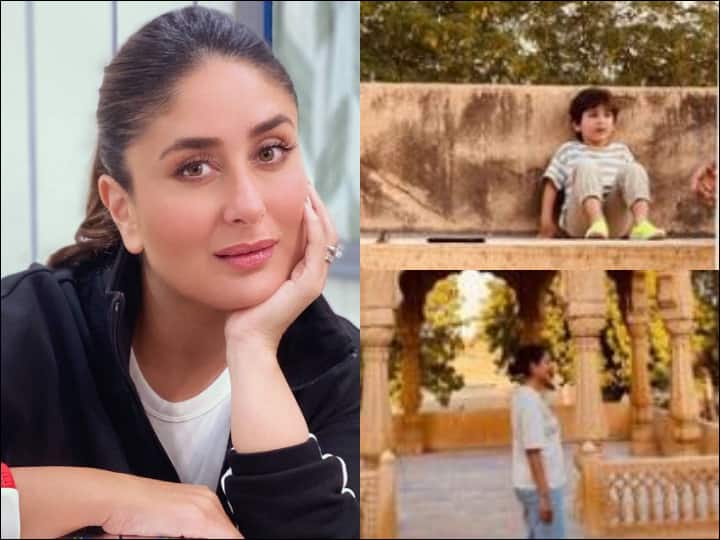 Mumbai: Bollywood actress Kareena Kapoor Khan, who is currently busy enjoying a vacation with her family members in Rajasthan, shared a new picture of her son Taimur Ali Khan. Bebo, her husband Saif Ali Khan and their two kids recently jetted off to Jaisalmer for a quick vacation. The ‘Good Newwz’ actress treated her followers with a new photo of little Tim from their trip.

Kareena, who is quite active on social media, posted a snap of her elder son Taimur on her Instagram story. She wrote, “With the love of my life.” The four-year-old can be seen wearing a striped t-shirt and yellow shoes in the photo.  Check it out!

The B-town diva shared another wherein she can be seen enjoying the fresh air in ‘The Golden City’ of India. The caption read, “Hangin around.”

Kareena and Saif, who recently celebrated their ninth wedding anniversary, became parents to Jehangir Ali Khan on February 21, 2021. They are on cloud nine since the arrival of their second child. The ‘Veere Di Wedding’ actress posted a picture of her newborn son from Jaisalmer along with the caption, “Downward Dog. Yoga runs in the family you see. #8 months Pike position.”

Karisma Kapoor, Amrita Arora and other tinsel town celebs had dropped comments on the post.

On the professional front, the ‘Jab We Met’ actress will be next seen in ‘Laal Singh Chaddha’. The film co-starring Aamir Khan is the Hindi adaptation of ‘Forrest Grump’. The much-awaited comedy drama will hit the silver screens on February 14, 2022.