The investigation into the Mumbai cruise drug case has devolved into allegations and counter-allegations, making the case murkier than it already is

File image of Aryan Khan, arrested in the cruise drugs case, being escorted at the NCB office after a medical check-up, in Mumbai. PTI

Aryan Khan, Kiran Gosavi, Sameer Wankhede… The drugs on cruise raid, in which Shah Rukh Khan’s son has been arrested, has thrown up too many names, complicating the issue.

As Aryan Khan awaits his bail plea in the Bombay High Court, Firstpost tries to highlight the key individuals in this case and how they are interconnected.

Born on 13 November 1997, Aryan Khan is the eldest child of Bollywood superstar Shah Rukh Khan and Gauri Khan.
He did his schooling in the US, UK and Mumbai.

The 23-year-old Khan was arrested off a cruise ship on 2 October. The Narcotics Control Bureau (NCB), which arrested him along with several others, said they were detained under laws “related to possession, consumption and sale of illegal substances”.

He was charged under sections 8(c), 20(b), 27 and 35 of the Narcotic Drugs and Psychotropic Substances (NDPS) Act and is currently lodged at Arthur Road prison in Mumbai.

Aryan Khan’s legal team, which includes senior advocates Satish Maneshinde and Amit Desai, have been arguing for him to be released on bail. The NCB, represented by Additional Solicitor General Anil Singh, opposed the bail plea.

Sameer Wankhede is leading the NCB’s investigation into the Mumbai cruise drugs case. In the past, while serving in the Customs Department, he reportedly did not give custom clearance to many celebrities until they disclosed the goods bought in foreign currency and paid tax on it. The top cop has also raided properties owned by many Bollywood celebs including Anurag Kashyap, Vivek Oberoi and Ram Gopal Varma.

In the Aryan Khan case, things have become twisted and a lot of focus has moved on to Sameer Wankhede after Maharashtra minister Nawab Malik levelled a series of charges against him.

According to one of Malik’s allegations, an anonymous employee of the anti-drug bureau has alleged that Wankhede framed innocent people in 26 fake drug cases. He also claimed that Wankhede had illegally tapped phones of some people.

In another allegation made on Monday, Malik claimed that Wankhede was in fact a Muslim, but presented a Hindu caste certificate to get into the IRS.

Rebutting the allegations, Wankhede said he had married (in 2006) as per Muslim customs as per the wish of his late mother. “Fulfilling the wish of one’s mother in a secular country is not a crime. I am proud of secularism in our country. My mother was a Muslim and my father is a Hindu. I love both of them very much, ” Wankhede told PTI.

Wankhede asserted that he never converted to Islam and he belonged to a Hindu caste.

On 25 October, the NCB ordered a vigilance inquiry into the claims made by Prabhakar Sail, who is an independent witness in the cruise drugs case.

Sail has alleged an extortion bid of Rs 25 crore by some agency officials, including its Mumbai zonal director Sameer Wankhede, and others for letting off Aryan Khan.

Sail also claims to be the personal bodyguard of K P Gosavi.

Another key member in this entire hullabaloo is Kiran Gosavi, another ‘independent witness of the NCB in the drugs case. As of today, Gosavi has been detained by the Pune police.

Gosavi made headlines when a selfie of him with Shah Rukh Khan’s son Aryan, reportedly clicked at the NCB’s office, had gone viral. 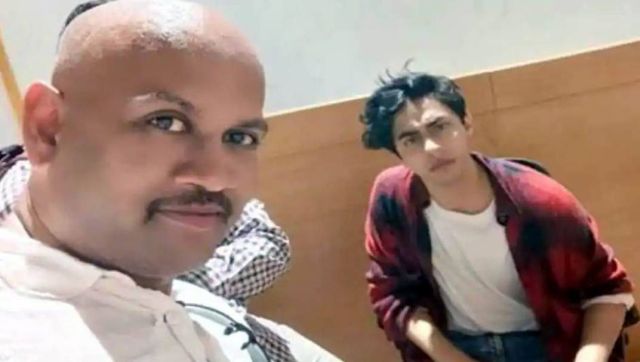 Gosavi has been called a witness in the NCB raid on the cruise ship off the Mumbai coast on 2 October. NDTV reported that Gosavi, a private investigator, was present during the cruise ship raid earlier this month and later at the NCB office with Aryan Khan.

A case has been registered against Gosavi with the Faraskhana police station of Pune city on 19 May 2018, for allegedly committing fraud by promising a person a job in Malaysia by taking money. However, he neither returned the money nor offered the job to the complainant.

Other than this, a case of fraud has been registered at the Kelwa Police station in Palghar on 18 October. As per the police, he had duped people of lakhs on the pretext of sending them abroad for jobs.

Additionally, Sail said he heard Gosavi having a telephonic conversation about pay-offs with one Sam D’Souza. Sail claimed he heard Gosavi say they should ask for a “bomb Rs 25 crore” and then settle at Rs 18 crore, of which Rs 8 crore is for the NCB’s zonal officer in charge of the investigation, Sameer Wankhede.

Gosavi has refuted these claims and added that he doesn’t know Wankhede at all.