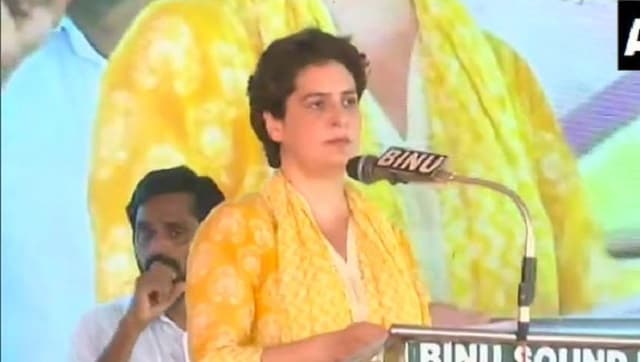 Had the Congress been serious about women empowerment, it would have made such statements in Punjab, Uttarakhand, Manipur and Goa where it is in serious contest for power in the 2022 elections

In 2019, the Congress sent Priyanka Gandhi Vadra to strengthen the party in Uttar Pradesh. Under her leadership, the Congress saw its vote share dip from 7.5 percent in 2014 to 6.4 percent in 2019, and from two Lok Sabha seats in 2014 to one seat of her mother in 2019. Her brother lost from the family seat of Amethi. She herself flirted with the idea of contesting from Varanasi against Prime Minister Narendra Modi in 2019, but later ducked the challenge.

Even after her failure as the Congress’ in-charge of Uttar Pradesh in 2019, her cheerleaders in the media and elsewhere tried hard to flaunt her political acumen. The only merit most of them have been able to enlist is her resemblance to Indira Gandhi in appearance.

Since 2019, Priyanka has not done any fundamental groundwork for the Congress in Uttar Pradesh. She did nothing significant for building the non-existent party structure in 75 districts of the state. Some event-based “tragedy tourism” in Sonbhadra, Hathras, Lakhimpur Kheri, etc., and becoming part of television news at least once a month has been her only strategy since the 2019 debacle. All along she had the support of many “friendly journalists”. Whenever she came out of her bungalow in Delhi and boarded her SUV for Uttar Pradesh, some known Lutyens’ journalists termed it Priyanka’s Belchi moment, in their attempt to pass on Indira Gandhi’s legacy to her.

In her constant attempt to be in the news, two days back, Priyanka made a declaration that the Congress would give 40 percent tickets in the upcoming Uttar Pradesh elections to women candidates. That comes to around 160 tickets out of 403 seats in the state. Priyanka’s media managers started painting it as her political masterstroke and a profound step towards women empowerment in the country. Let’s analyse how true to the cause of women empowerment is her declaration.

In early 2022 we have the Assembly elections in five states — Uttar Pradesh, Uttarakhand, Punjab, Manipur and Goa. Out of these five states, in Punjab, the Congress is in power and in Uttarakhand, Manipur and Goa it is the principal Opposition party. In Uttar Pradesh the party has been contesting for fourth place for the last two to three decades.

If the Congress were to be serious about women empowerment, it would have done a similar declaration in the states where they are in some serious contest in the 2022 elections. Just last week Congress had its Congress Working Committee (CWC) meeting and if the party were serious about it, it would have declared it there. If Priyanka is serious, she should first convince her mother, or maybe her brother, to start the reservation for women in the composition of CWC and state working committees of the Congress.

In fact, the real reason that’s coming from the ground reports is that no political leader of any significant standing wants to contest on the Congress’ symbol in Uttar Pradesh in the 2022 elections. The party has no ground team in districts. It’s almost impossible for the party to get 403 candidates in all the Assembly seats who can even save their deposits in the elections. So, in Uttar Pradesh, Priyanka seems to have made this declaration as a face-saver to get candidates on all the seats. In all probability, many failed and discredited political leaders will push their wives, sisters and mothers through this route as a proxy for them. Unfortunately, Priyanka herself defended this nepotistic trend during the press conference.

The year 1985 saw the last Congress government in Uttar Pradesh. Since then the party has been struggling to get a double-digit vote share in the state. In the last Assembly elections, its vote share was merely 6.3 percent with seven seats. The Congress has been trying to create a vote-bank in Uttar Pradesh by wooing different sections of the society.

Priyanka had inducted Imran Masood, who wanted to cut Prime Minister Modi into pieces, to give signal to the Muslim community. But now Imran seems to be defecting to the Samajwadi Party. Priyanka attempted wooing Brahmins through Jitin Prasada by claiming victimhood for gangster Vikas Dubey. But Jitin moved to the BJP recently. And now Priyanka Gandhi is trying to woo the women voters through this new declaration, promising 40 percent tickets to them.

Declaring 40 percent reservation for women in ticket distribution only in Uttar Pradesh, where the Congress is contesting for the fourth position, shows that it is just a gimmick rather than any masterstroke or steps towards women empowerment.

The author is a political commentator. Views expressed are personal.