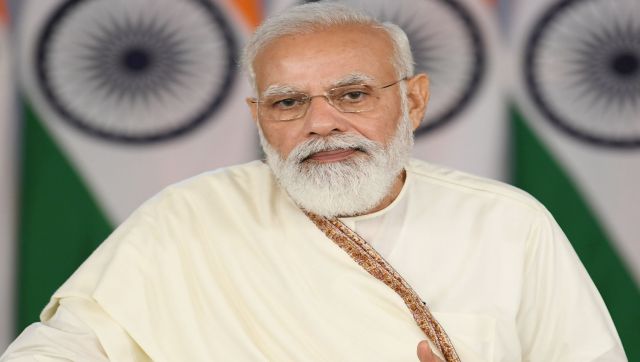 The prime minister also asked people to exercise caution during Diwali, saying masks have to become a part of life till the pandemic is over

vaccines to its citizens, Prime Minister Narendra Modi addressed the nation and hailed India’s inoculation drive, saying this achievement belongs to every individual in the country. “I congratulate every citizen for this feat.”

He congratulated all Indians for the major milestone achieved on Thursday. “This is not just a number, it is a beginning of a new chapter, a new India,” said Prime Minister Modi.

He said that India’s COVID-19

programme is a benchmark. Speaking of vaccine production, he said that initially India would usually import vaccines from other countries.

“It was questioned if India will be able to survive this pandemic… will there be vaccination? Are there enough funds? BUT this 100 crore mark has answered all questions,” he stated categorically.

In his address, he also called out those who had raised doubts about India’s capabilities.

Missed Narendra Modi’s address to the nation? Catch it here

He said proudly in his speech: “The whole world is looking at India with pride – Now world believes that India has successfully defeated COVID-19

The prime minister also raised the issue of his plan of banging thalis and lighting diyas. He said, “Many people mocked the ‘Tali thali, diya jalao’ but common man participated and fought COVID-19

The prime minister also hailed the role of science and scientists in our innoculation drive, saying that the vaccine programme was “science-born, science-driven and science-based. From development of vaccines to inoculation, science has been the base for all processes”.

He also reiterated that India’s vaccine programme was a prime example of ‘Made in India’ and that we should continue being ‘Vocal for Local’.

The prime minister also raised the issue of Made in India and said that should insist on buying every little thing in ‘Made in India’ and this would be possible only with the efforts of every Indian.

In his national address, he also raised the issue of India’s economy, saying, “Experts in India and abroad are very positive about India’s economy. Today, not only record investment is coming to Indian companies but new employment opportunities are also being created for the youth.”

He also said that as India preps for Diwali, we shouldn’t drop our guard and if we continued to follow COVID-19

protocols, including mask wearing “we would very soon defeat the pandemic.”

He concluded by saying, “We don’t have to be careless”.

Prime Minister Narendra Modi had earlier in an opinion piece for the Indian Express had written that India’s vaccination drive was a “journey from anxiety to assurance” and that has made the country emerge stronger, and credited its success to people’s trust in the vaccines despite various efforts to create mistrust and panic.

To celebrate the 100-crore milestone, the prime minister had also changed his profile image on Twitter, which now says, ‘India – 100 Crore COVID-19