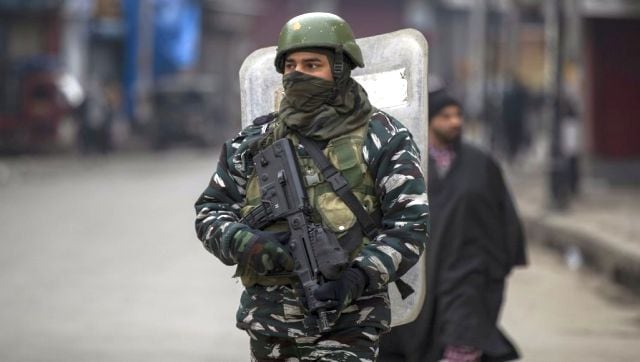 One soldier lost his life while two others sustained injuries in the Shopian operation. A police official said, so far, 15 terrorists have been killed in two weeks

File image of an Indian soldir patrolling the market in Srinagar. AP

Srinagar: Security forces on Wednesday eliminated four militants, including two commanders of Lashkar-e-Toiba (LeT), who were involved in the killing of migrant labourers in Jammu and Kashmir, police said.

While two ultras were killed in the encounter at Dragad in Shopian, two more were eliminated in a gunbattle in Kulgam district, a police official said, adding so far 15 terrorists have been killed in two weeks.

One soldier lost his life while two others sustained injuries in the Shopian operation.

“Police and Army #neutralised LeT district commander (Gulzar Ahmad Reshi) of Kulgam and one other, who were involved in #killings of two poor labourers from Bihar on 17/10/21 at Wanpoh,” IGP Kashmir zone Vijay Kumar said in a tweet.

According to a defence spokesman, a joint operation was launched on Wednesday evening after information was received about the movement of two terrorists along the road Ashmuji-Devsar in Kulgam district

“The area was cordoned off and contact established at about 7.40 pm. Repeated surrender appeals were turned down by terrorists,” the spokesman said.

He said the ultras opened fire, forcing the security forces to retaliate.

“In the ensuing firefight, two terrorists have been neutralised. An AK rifle and other warlike stores have been recovered,” he added.

Earlier in the day,  security forces launched a cordon and search operation in Dragad area of Shopian district following information about the presence of militants there, the officials said.

They said the search operation turned into an encounter after militants opened fire on the security forces who retaliated.

The officials said two ultras of The Resistance Front (TRF), a shadow outfit of Lashkar-e-Toiba,  were killed.

Three security force personnel also sustained injuries in the operation. One of the injured soldiers later succumbed to injuries at a hospital here,  the officials said.

One of the slain ultras was been identified as Adil Wani, who had joined the militant ranks in July 2020.

“One of the killed #terrorists has been #identified as Adil Ah Wani, active since 7/2020… So far, 15 terrorists have been #neutralised in 2 weeks,” IGP Kumar said in another tweet.

He said Wani was involved in the killing of Saghir Ahmad,  a carpenter from Uttar Pradesh’s Saharanpur,

Meanwhile, security forces foiled a terror plot by arresting a man with a live hand grenade in Kishtwar district on Wednesday, officials said.

The arrested person has been identified as Sohail Ahmed Bhat of Bathri Gandoh village of Doda district. He is a suspected overground worker of the LeT, they said.

During a search of vehicles and passengers, the security personnel noticed suspicious movement of one person who was trying to evade checking and frisking, sources added.

However, alert jawans immediately overpowered him and a hand grenade was recovered from his possession, they said.