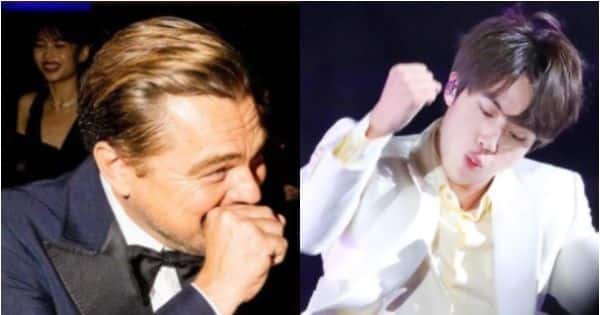 Leonardo DiCaprio ruled over social media after his interaction with Lauren Sanchez, the girlfriend of Jeff Bezos went viral. He is also almost confirmed to play the role of Jim Jones in a new movie. BTS Jin is making waves on the global iTunes chart vying to beat or tie up with Adele to become the vocalist of the year. Here is a look at the trending news of the day…. Also Read – Whoa! BTS Jin’s Jirisan OST Yours is all set to tie up with Adele’s Easy On Me; fans say ‘Never thought we’d be seeing Seokjin and Adele competing on the charts….MASSIVE’

Jeff Bezos warns Leonardo DiCaprio after viral clip
Twitter had some fun at the expense of world’s richest man Jeff Bezos after a clip of his girlfriend Lauren Sanchez looking at Leonardo DiCaprio in a star-struck manner went viral. The event was the LACMA awards which is being attended by the likes of Blackpink’s Jennie and Squid Game cast. Lauren Sanchez could not stop gazing at Leo in the clip. After news portals gave funny headlines on how Leo was set to steal Bezos’ ladylove, the Amazon founder made the below tweet. It is just so funny. Also Read – Has Adele shaved her hair off for her next album? — view pic

Leo, come over here, I want to show you something… @LeoDiCaprio https://t.co/Gt2v9JZTNz pic.twitter.com/KqGLB839NI

BTS Jin gives stiff competition to Adele on global iTunes chart
BTS’ Mr. Worldwide Handsome Jin is winning over the globe with his OST from Jirisan, Yours. The song is now No.1 in 92 countries second only to Adele’s Easy On Me. It should tie with or supersede it by tomorrow. This is the top performance by an Asian artist on the iTunes chart in 2021 and a Korean soloist. Given the fact that the song was hardly promoted on any platform, this is huge. Vocalist Jin is surely going for gold. Also Read – Adele’s former fitness trainer reveals how the Oscar and Grammy winner lost a whopping 45 kg

Britney Spears poses only in a thong
Britney Spears left little to the imagination as she posted pictures clad only in a yellow thong. She said it was her first proper photoshoot from home. Check out the raunchy pic here…

Kardashian family devastated after tragedy at Astroworld
Travis Scott has found support from the ladies of the Kardashian family after the incident at Astroworld that left nine people dead and some critically injured. Kim Kardashian tweeted that the whole family was in shock and devastated by the tragedy that happened. She tweeted, “We are keeping all of the victims, families and loved ones impacted in our prayers for healing – as well as Travis who we know cares so much about his fans and is truly devastated.”