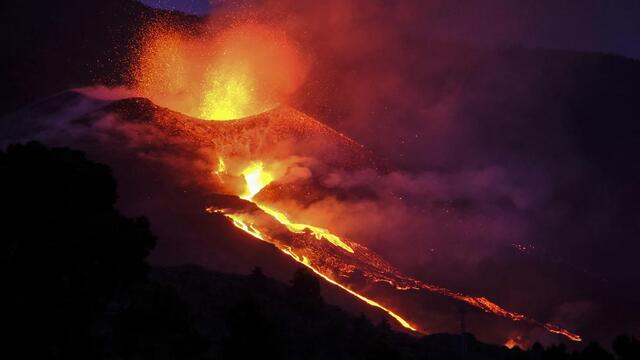 The CEO of drone operator Aerocamaras, Jaime Pereira said, this operation is probably the first time where a drone will be used to rescue an animal

Lava flows from a volcano on the Canary island of La Palma, Spain. AP/Daniel Roca

Three dogs, which were stranded near a volcano on the island of La Palma in Spain for weeks, are now set to be rescued by a drone. A drone operator was granted permission to rescue the dogs, who have been stranded in an abandoned yard filled with volcanic ash on the island for weeks, according to Reuters.

The CEO of drone operator Aerocamaras, Jaime Pereira, said the operation was crucial and a plan was being drawn-up to carry out the rescue operation. A drone weighing 50 kilograms, with a wide net, will be sent to the zone where the dogs are trapped. The dogs will be rescued one by one and will be brought to a safe place.

However, since the place is also affected by flowing lava, the drone will have merely four minutes to bring the dog inside the net and another four minutes to take the dog and fly away to a safe place, 450 metres away over flowing lava. The net will be operated through a remote control, which could make the delicate rescue operation a bit easier.

Pereira stated that this operation is probably the first time where a drone will be used to rescue an animal, adding that the drone operation was the only option left to save the dogs.

Right now, test flights are being carried out to check how dogs respond to the drones and if there is any possibility of them getting scared of the machines. However, Pereira said that they could only anticipate the reactions of the three animals and hoped they responded positively to the drones.

Until now, drones have dropped food packages to the emaciated dogs. Helicopters are prohibited from flying to the area due to the hot gases emerging from the lava.

The volcanic eruption at La Palma, a part of the volcanic Canary islands, has seen hot lava engulf almost 800 hectares (2000 acres) of land, since it first erupted on 19 September. More than 6,000 people have been forced to leave their homes and over 2,000 buildings have been destroyed by the eruption.