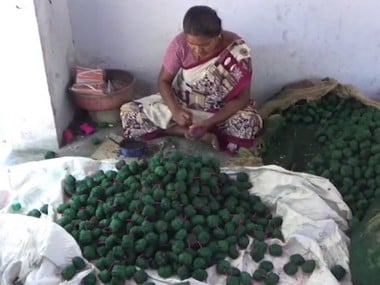 Several firecrackers units have laid off workers since the SC ban on crackers. 101Reporters

The firecracker manufacturing headquarters of the country, Sivakasi in Virudhunagar district of southern Tamil Nadu, is looking to Chief Minister MK Stalin to rescue the firecracker industry that gives employment and livelihood to some eight-lakh people from its death throes.

For the past two years, Sivakasi, which earns  Rs 7,000 crore to Rs 8,000 crore during Diwali, has been badly hit by the bans imposed on the sale of firecrackers owing to pollution. While the Supreme Court has ordered a ban in Delhi-NCR, the National Green Tribunal has also come out with restrictions for the sale of firecrackers in cities and towns with higher pollution levels.

“This has resulted in halving production and sales of firecrackers, and if this continues for another two-three years, the Sivakasi firecracker industry will die,” lamented PCA Asaithambi, president, Sivakasi Fireworks Manufacturers Association. Sivakasi is home to 1,070 registered firecracker units and its neighbourhood houses many hundreds of unregistered units that take up job works on behalf of the large factories.

“The slash in production and sales has meant at least half of the workers in the industry are currently unemployed, and many allied industries have also lost business,” Asaithambi said.

Asaithambi thanked Rajasthan chief minister Ashok Gehlot, who has already allowed the sale of green crackers in the state following a request from his Tamil Nadu counterpart MK Stalin. The moment news came from Jaipur over the Rajasthan government’s decision allowing green firecracker sales, Stalin too thanked Chief Minister Gehlot and said, “Your kind act will light up the lives of lakhs of people who are dependent on this industry for their livelihood.”

AS Rajendran Raja, vice-president, Indian Fireworks Manufacturing Association, was besieged with calls from Jaipur and other towns of Rajasthan for crackers from the dealers, who till then had refused to purchase this year. “It is difficult at the last minute, but we are trying hard to meet the demand from dealers there,” Raja said. “Some manufacturers here who have stocks can rush them. To manufacture fresh ones, there is not enough time. And it has rained here a little, which is not good for us,” he added.

Stalin had also written to the chief ministers of Delhi, Haryana, Odisha and also spoke with his Andhra Pradesh and Telangana counterparts to lobby with them on behalf of the struggling Sivakasi firecracker industry.

Stalin maintained that bursting crackers was an integral part of Indian festivals, and more so Diwali, and the states should allow the firecrackers that caused lesser environmental pollution — green firecrackers. Following the Supreme Court ban and NGT restrictions, manufacturers in Sivakasi worked on their processes to reduce emissions and bring them within permissible limits. At least some 60 percent of Sivakasi manufacturing is now devoted to green crackers, according to rough industry estimates.

The fireworks manufacturers hoped that Stalin would also touch base with Uttar Pradesh chief minister Yogi Adityanath to plead for allowing the sale of green crackers in the most populous state and important market for firecrackers.

Concentrated in Sivakasi town, the firecracker industry engaged nearly eight lakh workers and is the largest in the country. But it has been suffering for the past few years owing to the campaign by environmentalists and verdicts from the courts that frowned upon pollution-causing firecrackers and imposed a ban during the Diwali festival when the sales are maximum.

“I understand that you have taken this decision based on concerns regarding air pollution. I wish to draw your attention to the fact that the Supreme Court has already banned certain categories of polluting firecrackers and now, green crackers with significantly lesser emissions are being manufactured. Therefore, a blanket ban on firecrackers is not reasonable. Such a ban is not prevalent in other countries,” Stalin said.

Moreover, such a ban, if imposed by other states, would lead to the closure of the entire industry, jeopardising the livelihood of lakhs of people, Stalin said and underlined that the bursting of firecrackers was an integral part of Indian festivals, especially Diwali. “What is needed is a balanced approach that gives due regard to the environment, livelihood and public health is possible and necessary,” he said.

pandemic has had a crippled the MSME sector in the country, and its impact on Tamil Nadu’s economy that is largely dependent on the MSME sector has been very harsh, he said. “My government is now in the process of reviving the sector through focused interventions,” Stalin added.

The continued ban on the sale of firecrackers for Diwali, imposed for the past three years, has left several manufacturers and dealers with huge quantities of unsold inventories.

“If it continues like this, I am afraid Sivakasi will die a painful death,” said Asaithambi, echoing the sentiments of the industry. “The government should allow the bursting of firecrackers as they do not strictly fall under polluting objects as per the definition contained in the provisions of the Environment Act,” he added.