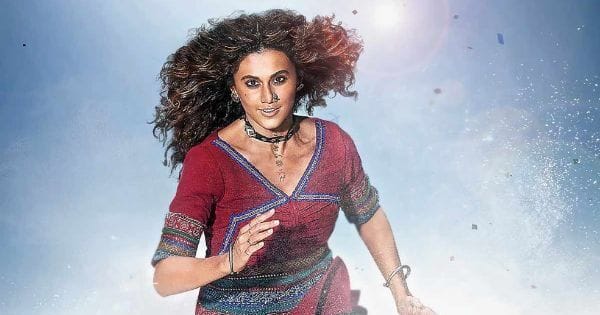 ZEE5 along with Ronnie Screwvala’s RSVP & Mango People Media brought forth an edge-of-the-seat, sports drama, Rashmi Rocket which has been receiving rave reviews from critics and viewers alike! Fantastic performances by talented actors Taapsee Pannu, Priyanshu Painyuli, Abhishek Banerjee and Supriya Pathak coupled with the ace direction of Akarsh Khurana has made this movie a spectacular hit! For the first time in Indian cinema, a movie has been conceptualized and executed on gender testing in sports for female athletes and the makers are being appreciated whole-heartedly for drawing attention to such a pertinent topic. Also Read – [EXCLUSIVE] Rashmi Rocket: Were Priyanshu Painyuli and Abhishek Banerjee intimidated by Taapsee Pannu? The duo spill the beans

With an IMDB rating of 7.8 and 12Mn+ views across platforms within 10 days of premiere, Rashmi Rocket is slated to be one of the best sports films in India. The movie raises pertinent questions about the practice of gender testing that female athletes are subjected to worldwide and manages to inform, entertain and educate its audience about an archaic practice that should be left far behind. An impactful movie with a soul, Rashmi Rocket deals with Rashmi’s battle on-field and off-field, a mature relationship between Rashmi and her husband, a delicate equation between an adamant Rashmi and her equally adamant mother and many more things. Also Read – Trending OTT News Today: Nawazuddin Siddiqui, Vir Das nominated at International Emmys; high praise for Taapsee Pannu’s Rashmi Rocket and more

Even the trailer and the songs of the movie are trending. With over 17Mn views for the trailer and 12Mn views for Ghani Cool Chori song on YouTube, the movie and its songs have made a mark. Also Read – Rashmi Rocket: Vicky Kaushal, Bhumi Pednekar, Anurag Kashyap, Anubhav Sinha and more praise Taapsee Pannu’s trailer on ZEE5

Manish Kalra, Chief Business Officer, ZEE5 India shared, “At ZEE5, we have a single-minded focus on presenting quality content to our viewers. Rashmi Rocket is a thoughtful and entertaining movie that has shed light on the archaic practice of gender testing in sports. We are elated that the viewers are loving this sport film which is as much about the sport as it is about the many women who battle age old biases at and out of home. This movie has definitely sparked a positive conversation and we hope that it propels the movement in the right direction, as is necessary.”

Helmed by Taapsee Pannu, Rashmi Rocket is about a girl from Kutch who is an incredibly fast runner and wins accolades for the country. However, her victory lap is peppered with many hurdles including a gender test, and what seems like an athletic contest turns into her personal battle for respect, honour, and even her very identity. To promote the movie, ZEE5 introduced a critical social awareness campaign, #LetRashmiRun which surpassed 20 million views and delivered a simple but strong message of stopping gender testing for female athletes in India.