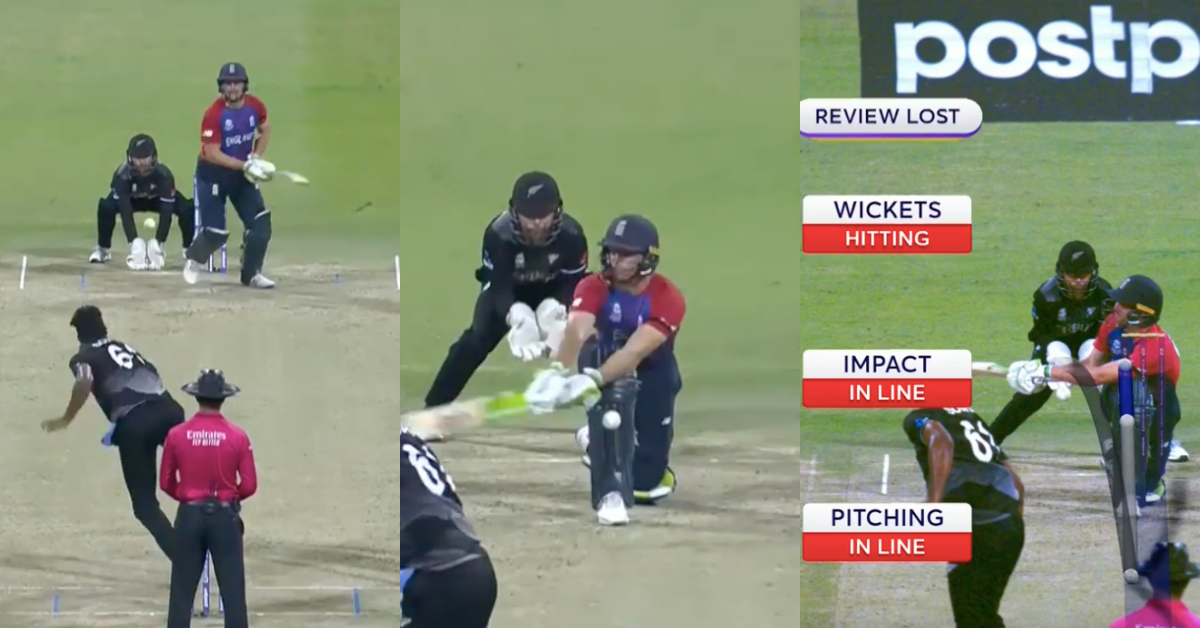 New Zealand leg-spinner Ish Sodhi gave a huge blow to England as he got better of star and in-form opener Jos Buttler during the semi-final on Wednesday in Abu Dhabi.

Buttler hadn’t been able to score runs as freely against the pacers as he would have liked to and hence was looking for a release shot against Ish Sodhi on his first ball with a reverse-sweep.

However, the leg-spinner remained calm and bowled to his strength of attacking the stumps. A delivery on the off-stump line went straight and snuck under Buttler’s attempted reverse-sweep.

Ish Sodhi immediately went up with his appeal, and so did Kumar Dharmasena’s finger. The decision of ‘out’ was challenged by Buttler but the hawk-eye revealed everything was in favour of Ish Sodhi.

After being put in to bat first, England openers Jos Buttler and Jonny Bairstow were kept tied down for the first three overs, scoring 13 runs. Trent Boult then leaked 16 runs in the fourth and Tim Southee conceded 8 in the fifth with both openers scoring boundaries.

Adam Milne struck on the first ball of the sixth over with Bairstow’s wicket, caught by Williamson at mid-off. England ended the powerplay at 40/1. Buttler was the next batsman to be dismissed as he missed a reverse sweep to Ish Sodhi, getting out lbw for 29 off 24 balls.

Dawid Malan then brought out a flurry of well-timed boundaries on the off-side; Moeen Ali, though, wasn’t as fluent at the other end. Malan pulled Southee for the first six off England’s innings, but the veteran pacer had the last laugh, edging Malan to the wicket-keeper. At the time of writing, England are 119/3 at the 16-over mark.