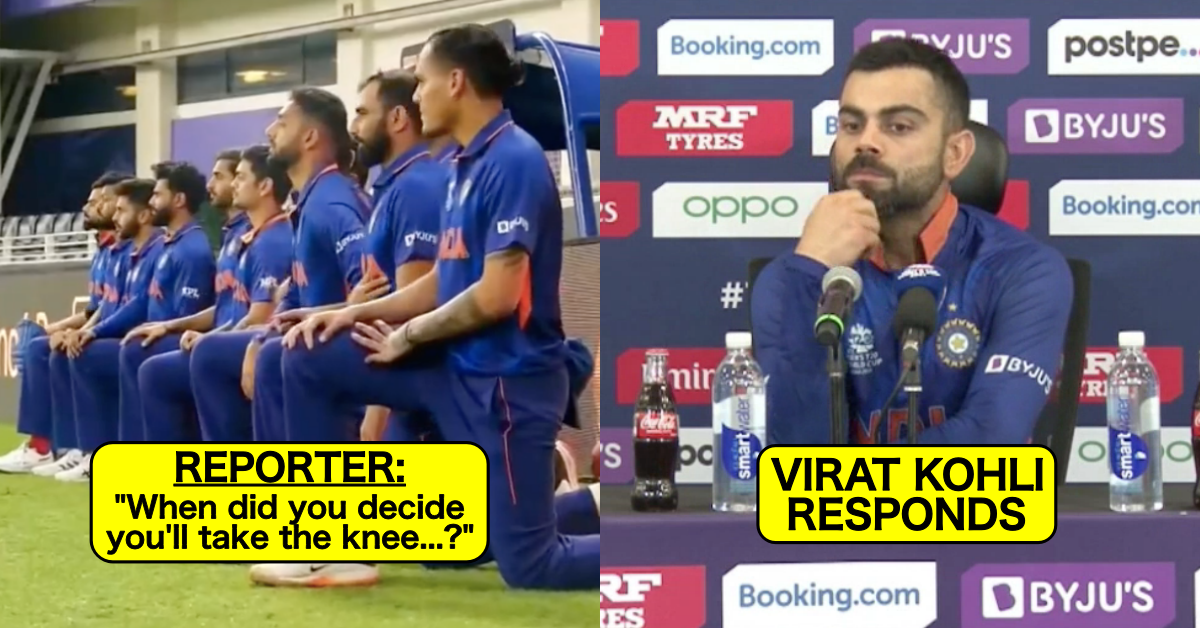 India captain Virat Kohli explained that the decision to take the knee to show their support for the Black Lives Matter (BLM) was taken well before the game versus Pakistan started.

All the Indian players took the knee ahead of the first ball of their match versus Pakistan on Sunday evening in Dubai. While the Indian contingent took the knee, the Pakistan players were standing with their hands on their hearts.

Rohit Sharma was seen enquiring Babar Azam whether they will also be taking the knee, but the Pakistan captain denied doing that. Instead, the Men In Green put their hands on their hearts.

“That was communicated to us by the management. The Pakistan team agreed to pay their tribute towards the same cause, and then we accepted our side of things as well. So that’s how it was decided,” Virat Kohli revealed at the press conference after the match.

The BLM movement has been a talking point over the past year with sportspersons taking a knee showing their strong support towards this cause. Throughout the T20 World Cup, we have seen other teams also doing this act to voice their solidarity against racism and other forms of discrimination.

India suffered a crushing 10-wicket loss to their arch-rivals as openers Babar Azam (68* off 52) and Mohammad Rizwan (79* off 55) chased down the target of 152  with 13 balls to spare after the bowlers had restricted India to a below-par total, which Virat Kohli admitted was “15-20” short.

Shaheen Afridi took the Man of the Match award for his scintillating spell wherein he dismissed Rohit Sharma and KL Rahul with the new ball and later got the better of half-centurion Virat Kohli. The Indian captain conceded that they have been outplayed in both the departments on Sunday.

“We didn’t execute properly. Credit where it’s due and Pakistan outplayed us today. They started brilliantly with the ball, and 3 wickets for 20 runs was not a good start. We needed wickets early but with the bat they gave us absolutely no chances,” Virat Kohli said after the game.

“It played slow in the first half and hitting through the line was not that easy as it was in the second half, after 10 overs. We needed those 15-20 extra runs and for that we needed a good start but Pakistan’s bowling didn’t allow us to get those extra runs,” he added.

India will next meet New Zealand on October 31, next Sunday, in Dubai. They will then play Afghanistan, Scotland, and Namibia in the Super 12 stage.