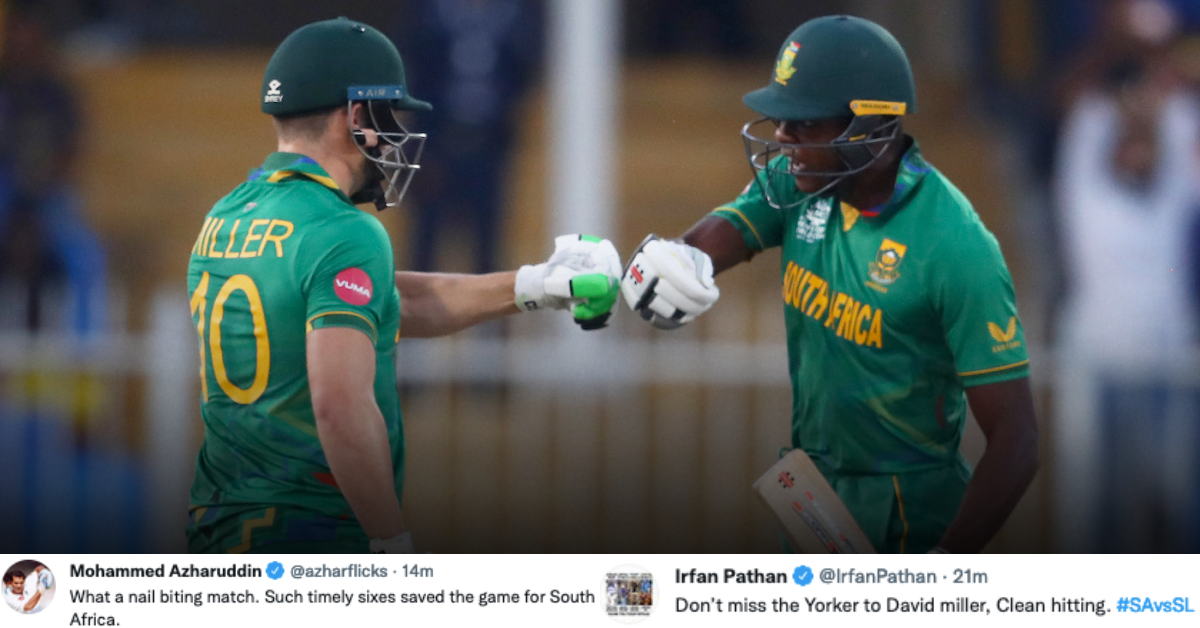 David Miller lived up to the expectations as he hammered Sri Lanka‘s Lahiru Kumara for two sixes in the last over to take South Africa over the line in a tense chase in Sharjah.

Chasing 143, South Africa were given a double blow by Dushmantha Chameera, who dismissed both openers, Quinton de Kock and Reeza Hendricks. Skipper Bavuma and Rassie van der Dussen began to build a partnership but the latter got run out after confusion between the pair.

Aiden Markram, riding on the form of the previous game, started attacking with Bavuma, but the right-hander was bowled by Wanindu Hasaranga before the death overs.

Bavuma thumped a six off Chameera but got out to Hasaranga, and so did Pretorius as the mystery spinner claimed a hat-trick, leaving South Africa 25 runs needed from 12 balls. Kagiso Rabada lofted Chameera for a maximum and David Miller cleaned up the chase in the last over with two big sixes off Kumara.

Earlier, after electing to bowl first, South Africa were given a solid start by Anrich Nortje who castled Kusal Perera. Pathum Nissanka held on end, batting at less than run-a-ball, while Charith Asalanka attacked with a couple of boundaries off Nortje to close the powerplay at 39/1.

Nissanka and Asalanka both smashed Keshav Maharaj for a maximum each before the latter got run out. Tabraiz Shamsi then struck with three dismissals that of Rajapaksa and Avishka Fernando – both caught and bowled – and Hasaranga.

Nissanka batted cautiously to raise his fifty off 46 balls. While he stroked a few boundaries, he lost skipper’s Shanaka’s services at the other end, falling to Dwaine Pretorius.

The left-hander then tore into Kagiso Rabada, whacking the pacer for a six and a couple of boundaries. South Africa had four more wickets in the last two overs, conceding only 13, as Sri Lanka, riding on Nissanka’s 58-ball 72, ended on 142.

What a nail biting match. Such timely sixes saved the game for South Africa. #T20WorldCup21 #SAvsSL

Congratulations South Africa! Good to see holding your nerves #SAvsSL game. #Hasaranga did his best but I guess today was not his team’s day. #SLvSA #T20WorldCup

Killer Miller is back! https://t.co/oKtkNSXchD

David Miller hits two massive sixes in the final over as the Proteas win. Heartbreak for #SriLanka, who had 15 runs to defend. #SouthAfrica earn a crucial two points in Group 1. pic.twitter.com/5uCoJAe6ai

David Miller is the hero for South Africa, need 14 from 5 balls then he smashed 6,6,1 and Rabada finished the match with a four. A game to remember for South Africa in the T20 World Cup 2021.

Sharjah has produced some classic matches in the Super 12 in T20 World Cup 2021:

Miller is the hero, the Killer Miller finisher is back. #T20WorldCup

Kagiso Rabada, that six. That brought the game back and Miller closed it. What a game!

Miller and Rabada win it for South Africa and they stay alive! What a finish! #T20WorldCup