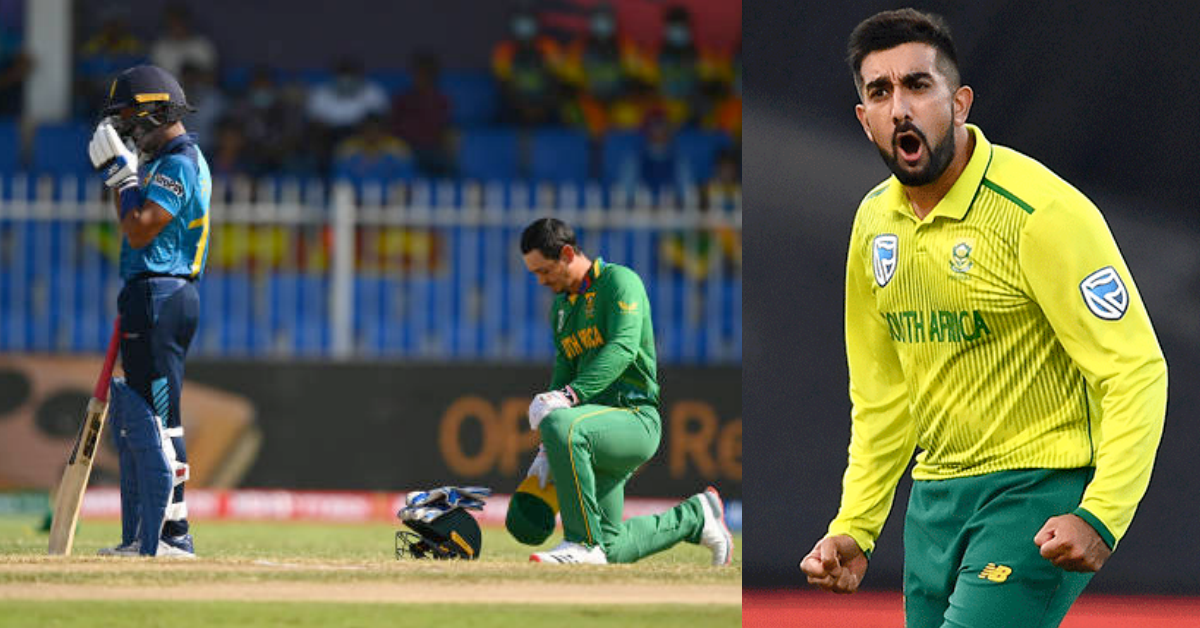 South Africa spinner Tabraiz Shamsi didn’t offer much of his opinion about the Sri Lanka team not taking the knee, on Friday when the two sides clashed and in the tournament so far.

The taking of the knee has been a significant part of the talks around the South African team in the past few days after Quinton de Kock pulled out of the West Indies game on defying the directive from CSA which made it mandatory for all of their players to take the knee, a gesture showing support to the Black Lives Matter (BLM) movement.

De Kock then apologised and returned to the side against Sri Lanka and also took the knee for the first time. The Sri Lankan team, though, didn’t make this gesture – or any with regards to the BLM – on Saturday.

After the game, in the post-match press conference, Tabraiz Shamsi was enquired about this by CricketAddictor.

My question is: “Sri Lanka haven’t taken a knee so far in this tournament just like today as directed by their board not to take the knee in support of BLM movement, How do you feel about it both as an individual and also as team?”

“I have nothing to say to that, Doesn’t matter to the South African team,” bluntly replied Tabraiz Shamsi.

The chinaman was Man of the Match for his remarkable figures of 3/17 which helped South Africa restrict Sri Lanka to 142. The chase, though, went into the last over with requiring David Miller to wallop a couple of sixes to take his side home.

Chasing 143, South Africa were given a double blow by Dushmantha Chameera, who dismissed both openers, Quinton de Kock and Reeza Hendricks. Skipper Bavuma and Rassie van der Dussen began to build a partnership but the latter got run out after confusion between the pair.

Aiden Markram, riding on the form of the previous game, started attacking with Bavuma, but the right-hander was bowled by Wanindu Hasaranga before the death overs.

Bavuma thumped a six off Chameera but got out to Hasaranga, and so did Pretorius as the mystery spinner claimed a hat-trick, leaving South Africa 25 runs needed from 12 balls. Kagiso Rabada lofted Chameera for a maximum and David Miller cleaned up the chase in the last over with two big sixes off Kumara.