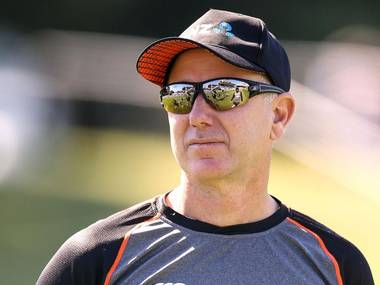 New Zealand head coach Gary Stead wasn’t impressed with ICC’s decision to delay a decision on Adam Milne playing in the first game against Pakistan and was eventually now allowed to play. With New Zealand’s premier fast bowler Lockie Ferguson ruled out of the tournament, it was important for the black caps to rope in reserve seamer Adam Milne in time against Pakistan, but it couldn’t take place.

New Zealand ended up losing to Pakistan in their first game by 5 wickets, and 8 balls left, and this could be a crucial loss for the Kiwis with the strong Indian side in the same group. New Zealand played two spinners, two fast bowlers, and the all-rounder in James Neesham, which wasn’t ideal as well. New Zealand’s head coach Gary Stead vented out his frustration at ICC for the decision on Adam Milne.

Gary Stead mentioned that he was very keen to get Adam Milne into the playing XI, but ICC’s approval had delayed it. He reckoned that it could have made a big difference as the pitch suited the fast bowlers well, and they definitely needed an out and right pacer. He added the example of Haris Rauf making a big difference in the side for Pakistan with his pace.

“We tried pretty hard to get across the line with the ICC our replacement player, but it wasn’t to be. That was really disappointing for us because Adam Milne is someone waiting in the wings as a like-for-like replacement”

“You can’t say you know for sure if it would have made a difference in the game, but for us, on that wicket, pace bowling and hitting the pitch as hard as what Adam does or Lockie does would have been a difference, we think. I think Haris Rauf showed for Pakistan the difference that it can make,” Gary Stead told after the loss to Pakistan.

Gary Stead mentioned that he will be looking to get clarification on why Adam Milne wasn’t allowed to take part on the same day that Lockie Ferguson was ruled out. He added that he had changed the team three times on the day, considering Adam Milne was allowed earlier to play.

“What we were told is they don’t give clearance on the same day, so we’ll question that reason and continue to seek clarification on that.”

“You always plan to have the changes like this, the most unsettling thing for us is we probably changed the team three times today on that decision. Originally we thought we’d got the clearance for Adam to play, but then it’s been turned down. So we were questioning it with the ICC as much as an hour and a half out from the game and arriving there,” he added.

New Zealand’s next game will be up against India on the 31st of October on Sunday.