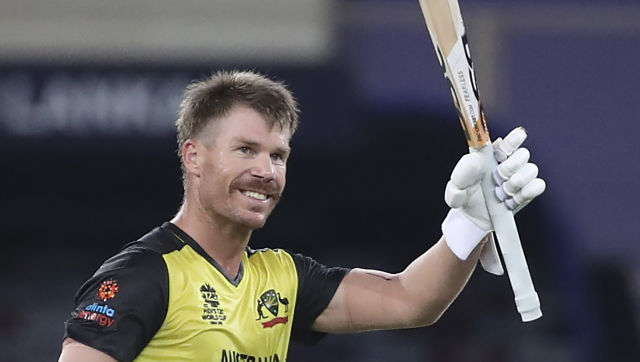 Australia opener David Warner’s bat finally oozed runs as his terrific half-century helped Australia beat Sri Lanka by seven wickets on Thursday to register their second victory in the ICC T20 World Cup 2021. Warner was under the microscope for his terrible form with the bat coming into the tournament and also in the warmup games.

Sri Lanka had been put to bat first by Aaron Finch, who won the toss and made 154/6 with Kusal Perera and Charith Asalanka top-scoring with 35 runs each. Bhanuka Rajapaksa made 33 runs, while Australia leggie Adam Zampa picked 2/12, while pacers Mitchell Starc and Pat Cummins also scalped two wickets apiece.

I Laugh At People Talking About My Form, I’ve Hardly Played Any Cricket: David Warner

“I actually think people talking about my form is quite funny. I laugh at the matter. I’ve played hardly any cricket. I had two games in the IPL and then warm-up games are warm-up games for a reason.

“Tonight, I had to obviously start fresh. Everyone was talking about my form, which I reiterated was not a thing I was worried about. It was about going out there and starting well. That’s all we’re trying to do, apply pressure to the bowlers.”

And David Warner was not wrong about his poor form as he was coming off scores of 14, 1, 0, and 2, including his last two innings for the Sunrisers Hyderabad in the IPL 2021’s UAE leg.

Though there was a lot of banter about his spot in the Australian playing XI due to his form, David Warner has asserted that his knock was not to silence the critics.

“Shutting the critics down? No, never. That’s the world of sport. When you ride the highs, you’ve got to ride the lows; you’ve got to stay confident, keep a smile on your face and never let it get to you,” David Warner concluded.

With two wins from two matches now, Australia plays England on Saturday for a place at the top of the points table.

Also Read: BCCI Just Got A USD 2 Billion Payday, And Hopefully, Some Of That Will Go Back Into Women’s IPL – Alyssa Healy