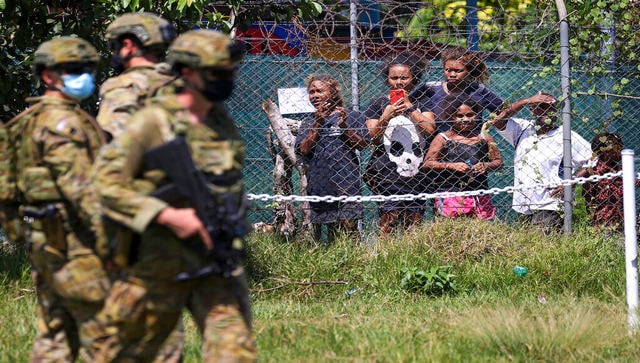 The Solomon Islands are famous as a battleground of World War II, the pivotal Battle of Guadalcanal named after the country’ largest island where the restive capital Honiara is located

Violence receded Friday in the capital of the Solomon Islands, but the government showed no signs of addressing the underlying grievances that sparked two days of riots, including concerns about the country’s increasing links with China.

Prime Minister Manasseh Sogavare sought to deflect attention from domestic issues by blaming outside interference for stirring up the protesters, with a thinly veiled reference to Taiwan and the United States.

External pressures were a “very big … influence. I don’t want to name names. We’ll leave it there,” Sogavare said.

Honiara’s Chinatown and its downtown precinct were focuses of rioters, looters and protesters who demanded the resignation of Sogavare, who has been prime minister intermittently since 2000.

Sogavare has been widely criticized by leaders of the country’s most populous island of Malaita for a 2019 decision to drop diplomatic ties with Taiwan in favor of mainland China. His government, meanwhile, has been upset over millions in US aid promised directly to Malaita, rather than through the central government.

Here’s a look at some of the reasons behind the turmoil:

The Solomon Islands are famous as a battleground of World War II, the pivotal Battle of Guadalcanal named after the country’ largest island where the restive capital Honiara is located.

It was then known as the British Solomon Islands Protectorate and became the Solomon Islands before independence in 1978. The South Pacific nation of 700,000 people — mostly Melanesian but also Polynesian, Micronesian, Chinese and European — is, like neighbouring Australia and New Zealand, a constitutional monarchy with Queen Elizabeth II the Head of State.

A migration of settlers from Malaita, the country’s second biggest island and most populous province, to the economic opportunities on Guadalcanal and Honiara stoked ethnic tensions and eventually unrest.

The South Pacific nation of 700,000 people is, like neighbouring Australia and New Zealand, a constitutional monarchy with Queen Elizabeth II the Head of State. Image courtesy: Google Maps

In the late 1990s, native Guadalcanal islanders, known as Guales, launched a campaign of violence and intimidation to drive the Malaitans off the island. The Malaita Eagle Force militia was formed to protect them in a conflict that led the government to declare a four-month state of emergency in 1999.

Australia and New Zealand rejected the government’s request for help. With the police force ethnically divided, law and order on Guadalcanal collapsed.

In 2000, the Malaita Eagle Force kidnapped Prime Minister Bartholomew Ulufa’alu, a Malaitan, because they did not consider he was doing enough for the Malaitans’ cause.

Ulufa’alu resigned in exchange for his freedom, and the current Prime Minister Manasseh Sogavare began the first of his four stints as the unstable nation’s leader.

What’s China’s role in the unrest?

China has provided another cause for the community to divide, with the government supporting Beijing and the Malatian leaders supporting Taiwan.

The self-ruled island of Taiwan split from mainland China after a civil war in 1949, but Beijing claims it as part of its territory and has persuaded all but 15 countries, most of them small and poor in Africa and Latin America, to switch recognition to the mainland.

But experts say the unrest on the Solomon Islands is driven by the same underlying causes that have undermined the social fabric for decades: inter-island and ethnic tensions, a perceived lack of sharing of resources between Guadalcanal and Malaita, widespread poverty and high youth unemployment.

“Geopolitical tensions have been the spark but not the major driver,” said Jonathan Pryke, Pacific Islands program director at the Lowy Institute international policy think tank.

“’I’m sure there is some degree of affection for Taiwan in Malaita, but it’s also another way for Malaitans to express their frustration at the national government,” he added.

Pryke said it was too soon to judge whether the Solomons would benefit financially from their 2019 switch in diplomatic relations to Beijing.

While Beijing’s financial inducements to cut ties with Taiwan have not yet borne fruit, the Solomons had closed its borders throughout the pandemic, which limited Chinese engagement.

Resentment against Chinese business people is longstanding on the Solomons and resulted in much of Honiara’s Chinatown being burned in 2006, and again this week.

“The Chinese communities are vulnerable in the Solomon Islands because they don’t have the traditional support base,” Pryke said. “They don’t have the tribes the families that would would given them some extra degree of cultural isolation from this sort of unrest.”

How did Australia become involved?

Australia and the Solomons signed their first bilateral security treaty in 2017. It provides a legal basis for the rapid deployment of Australian police, troops and associated civilians in the event of a major security challenge.

Australian police were in the air aboard a military transport plane within hours of Sogavare invoking the treaty on Thursday.

Australia had led a force of Pacific Islands police and troops under the Regional Assurance Mission to Solomon Islands, or RAMSI, from 2003 to 2017. It included 2,300 police and troops from 17 nations, invited by the Solomons’ government. The deployment successfully ended the conflict that killed 200 people.

In the five years of ethic and civil unrest before RAMSI arrived, the Solomons was close to becoming a failed state.

The bilateral treaty acknowledges that underlying causes of the unrest remained and posed development challenges.

“The Solomon Islands will need ongoing support to retain the gains made under RAMSI and to help build long-term stability and enduring growth,” the Australian government said in 2017.