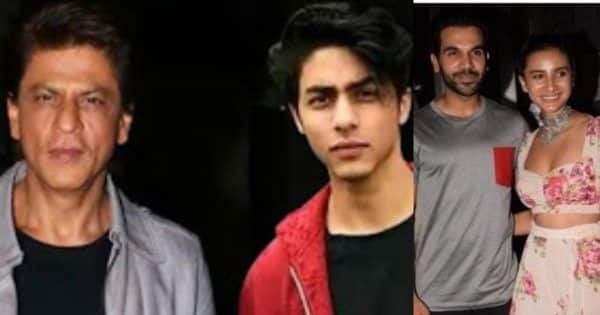 With Aryan Khan returning home, Shah Rukh Khan and Gauri Khan have now once again opened the doors to Mannat for friends. They had earlier kept their interaction with friends and family to quick phone calls and texts messages. Also Read – Meet Shah Rukh Khan’s manager Pooja Dadlani and know all about her family life, net worth and more

Read the full story here: As Aryan Khan returns home, Shah Rukh Khan and Gauri Khan now open doors of Mannat Also Read – Aryan Khan Case: Satish Maneshinde says that the star kid is ‘fortunate to get the best legal team’; says, ‘One can imagine what would happen to a poor man’

Shah Rukh Khan and Gauri Khan’s son Aryan Khan is out of jail. He was granted bail on Thursday by the Bombay High Court in the drugs-on-cruise case. However, he had to be in jail as the legal formalities were not complete. He returned home at around 11:30 am today. It was a festive atmosphere outside Mannat with fans playing dhol, bursting crackers and waving banners with their messages for Shah Rukh and Aryan.

Actor Siddhant Chaturvedi, who will be seen in the crime comedy, ‘Bunty Aur Babli 2′, is hopeful that he gets the opportunity to be the representative of talent that exists in his state, Uttar Pradesh. The actor hails from the small town of Ballia, Uttar Pradesh and he wants to make the town and state proud of his achievements. Talking about his struggle to make it big, Siddhanth said: “For someone who comes from a small town like Ballia, first getting a break in Bollywood, to now being a hero of a commercial big Hindi film is truly a dream come true.”

Rajkummar Rao and Patralekhaa to tie the knot in December?

As of now, everyone’s focus is on the Vicky Kaushal and Katrina Kaif wedding that is supposed to happen in the first week of December. But now news is coming that Rajkummar Rao and Patralekhaa might just marry before that. As per a report in Pinkvilla, they are planning to tie the knot in a low-key ceremony after Diwali.

Read the full story here: Rajkummar Rao and Patralekhaa to tie the knot in December?

Actor Nawazuddin Siddiqui was honoured with the Excellence in Cinema Award at the Filmfare Middle East Achievers Night held in Dubai.

Nawazuddin has made his name with the power-packed performances in films such as Talaash, Gangs of Wasseypur, Badlapur, Mom, Bajrangi Bhaijaan, Dekh Indian Circus, The Lunchbox, Photograph and Manto.

(With inputs from IANS)