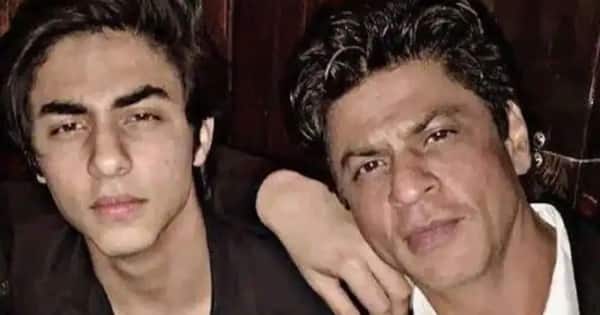 Shah Rukh Khan and Gauri Khan‘s son Aryan Khan was granted bail yesterday by the Bombay High Court in cruise ship drugs case. Today, the court passed the order and the formalities are being carried out. Juhi Chawla came forward to serve in as surety by signing Rs 1 lakh bond. Now, everyone is just waiting for the star kid to step out of the Arthur Road jail. Meanwhile, the security has been tightened outside Shah Rukh Khan’s house Mannat. Also Read – Aryan Khan to walk out of jail tomorrow: One more long night ahead for Shah Rukh Khan – Gauri as legal team misses 5.30 pm deadline for paperwork

The pictures and videos coming from outside Mannat suggest that SRK fans are all excited for Aryan Khan to come home. From banners to crackers, fans are just waiting to see King Khan’s son back home. In order to maintain order, the police has put out barricades outside Mannat. Fans have already started gathering outside SRK’s home to be a part of the celebrations. Watch the videos below: Also Read – Shah Rukh Khan’s Dil Se costar Piyush Mishra’s SHOCKING reaction on Aryan Khan’s drugs case: ‘Jo kiya hai wo bhugtenge aap. Apne bachcho ko sambhalein’

Meanwhile, latest reports coming in suggest that Shah Rukh Khan’s son Aryan Khan will be out of jail tomorrow. The legal team has supposedly missed 5.30 pm deadline for paperwork and hence, Aryan Khan will have to spend one more night in jail. Also Read – Aryan Khan Bail: From surrendering passport to making appearance before NCB every Friday – here are 14 clauses of the conditional bail

It was on October 3 that Aryan Khan was arrested after being detained by the Narcotics Control Bureau. For more than three weeks, he was in Arthur Road Jail.