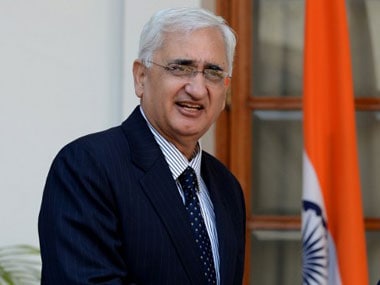 Reacting to Khurshid’s comments, BJP on Thursday accused the Opposition party of weaving a ‘web like a spider against Hindus’

New Delhi/Bhopal: Senior Congress leader Salman Khurshid sparked controversy by reportedly comparing a “robust version” of Hindutva to the jihadist Islam of terror groups such as the ISIS and Boko Haram with the BJP on Thursday accusing the opposition party of weaving a “web like a spider against Hindus”.

While a Delhi-based lawyer filed a complaint with the Delhi Police seeking registration of an FIR against Khurshid, a former Union minister, over his remark, Madhya Pradesh Home Minister Narrotam Mishra alleged that Congress leaders are “practitioners of appeasement politics”.

According to lawyer Vivek Garg, Khurshid, in his book Sunrise Over Ayodhya: Nationhood in Our Times, wrote: “Sanatan Dharma and classical Hinduism known to sages and saints were being pushed aside by a robust version of Hindutva, by all standards a political version similar to the jihadist Islam of groups like ISIS and Boko Haram of recent years.”

Addressing a press conference at the party headquarters in Delhi, BJP spokesperson Gaurav Bhatia said Khurshid’s book on the Ayodhya verdict hurts religious sentiments of people. The book was released on Wednesday.

“In this book Hinduism is compared to ISIS and Boko Haram,” Bhatia said, adding, “the Congress is weaving a web like a spider against Hindus.”

Alleging that this is happening at the behest of Congress president Sonia Gandhi and Rahul Gandhi, Bhatia questioned her silence on the issue and said: “If you remain silent, then it will be clear that your ideology is also against Hindus.”

Demanding Khurshid’s removal from the Congress, the BJP spokesperson said, “Earlier, the term ‘Hindu terrorism’ was invented when the Congress was in power.”

BJP IT cell head Amit Malviya in a tweet highlighted a paragraph of the book and said, “Congress’s Salman Khurshid in his new book writes that Hindutva is similar to the jihadist Islamist groups like ISIS and Boko Haram. What else can we expect from someone whose party coined the term Saffron terror just to draw equivalence with Islamic jihad, to get Muslim votes?”

Congress’s Salman Khurshid in his new book writes that Hindutva is similar to the jihadist Islamist groups like ISIS and Biko Haram.

What else can we expect from someone whose party coined the term Saffron terror just to draw equivalence with Islamic jihad, to get Muslim votes? pic.twitter.com/3OikNQJ3qt

Lawyer Garg said Khurshid made the remarks in a chapter called ‘The Saffron Sky’ (page-113).

Garg’s complaint was addressed to the Delhi Police Commissioner, Deputy Commissioner of Police (North) and the SHO of Roop Nagar police station seeking registration of an FIR in the matter under relevant sections of the Indian Penal Code(IPC).

When contacted, a senior police officer said, “We have received a complaint on Thursday but are verifying the allegations made by the complainant. Accordingly, action will be taken as per law.”

Minister Mishra said that whether it is Salman Khurshid or Digvijaya Singh they write controversial books to create controversy.

“Because all of them are practitioners of appeasement politics. The kind of alienation and feeling of separation they generate, no one else does it,” Mishra told reporters in Indore.

“Whether it is Congress party’s men or Gandhi family, they are the supporters of ‘Tukde-Tukde’ gang in the country,” he added.