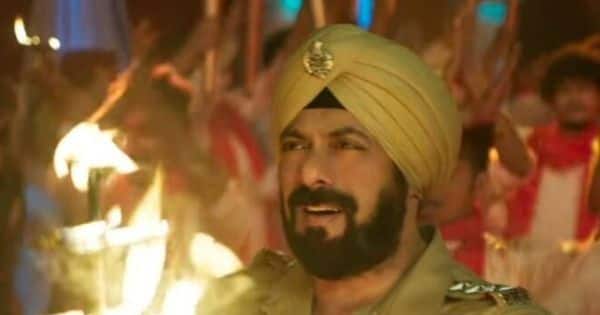 At the Antim trailer launch today, 25th October, at Bandra Kurla Complex (BKC), the media turned up in full force and posed a volley of questions to producer and superstar Salman Khan, who took them all on in his inimitable style. Among the many queries put forth, one that Bhai felt particularly passionate about was the ‘OTT vs theatrical’ debate and whether people would be willing to come back to theatres after such a long break. Not only did he address these points head on, but also confirmed something about Antim: The Final Truth that many were speculating till now. Also Read – Antim trailer: Salman Khan reveals why he doesn’t have a heroine in the movie like Aayush Sharma does

Opening up on how his upcoming movie was initially going the OTT way, Salman Khan said, “So, we had first planned Antim as an OTT release. In fact, it was a very good deal and would’ve benefited us a lot. The smart thing would be to go directly to OTT. But then, the announcement was made for theatres to reopen, and watching a film in theatres, or just bringing your own film to theatres is something different, that feeling can’t be replaced. So we decided to forgo the OTT release and go for theatres. And like y’all have now begun coming to theatres (indicating to the media contingent), we hope people will come for Antim, too.” Also Read – Antim trailer: Salman Khan opens up on his shirtless fight scene with Aayush Sharma: ‘Told him behenoi ko nahi maarte’

Elaborating on his statement of how the theatrical experience “can’t be replaced”, Bhaijaan added, “Many of us got used to watching movies or shows on phones, laptops, tablets, iPads, but truth be told, you just can’t enjoy a film the same way on a laptop or phone. That experience of watching a movie on the big screen in a cinema hall is a completely different feeling. That’s also why we are releasing Antim in theatres. We hope everybody would want to experience that feeling again.” Also Read – Antim trailer: Salman Khan and Aayush Sharma’s police vs gangster chase keeps audience on the edge; fans say, ‘looks like total paisa vasool seetimaar mass masala’

Antim: The Final Truth also stars Aayush Sharma and Mahima Makwana. Directed by Mahesh Manjrekar, it releases in theatres across India, including Maharashtra, on 26th November.