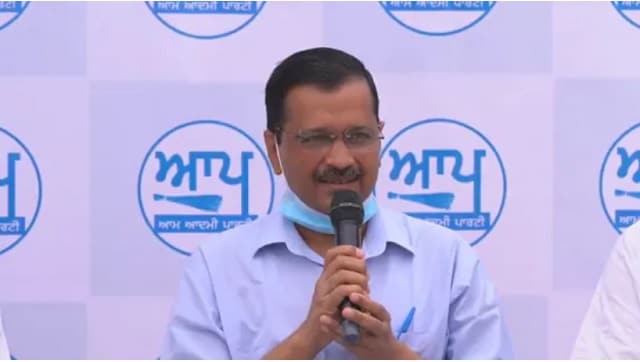 Whenever you stop at the red light, turn off your car’s engine. This will save fuel and also help reduce pollution, tweeted Delhi chief minister Arvind Kejriwal

New Delhi:  The Delhi government kicked started its month-long ‘Red Light On, Gaadi Off’ campaign across 100 crossings in the city on Monday to reduce vehicular emissions.

Delhi Chief Minister Arvind Kejriwal appealed to people to “contribute” in the fight against pollution and make the campaign successful.

“Please do contribute in this fight against pollution. Whenever you stop at the red light, please turn off your car’s engine. This will save fuel and also help reduce pollution. We all Delhiites will together reduce pollution in Delhi,” Kejriwal said in a tweet on Monday.

In the morning, Delhi Environment Minister Gopal Rai visited the ITO crossing and handed roses to commuters, and appealed to the people to turn off their car’s engines at red signals as well as extend their support to make this fight against pollution a success.

Vehicular emissions and dust are significant contributors to air pollution of any city, the minister said. “To reduce vehicular pollution, the Delhi government has started a ‘Red Light On, Gaadi Off’ campaign from today (Monday).

Data by the Petroleum Conservation Research Association (PCRA) shows that if people follow the exercise of switching off engines at traffic signals, pollution can be cut down by 13-20 per cent,” Rai said. “This is a public campaign. We all will have to fight together to beat pollution. I appeal to the public to follow the campaign,” he added.

Rai said pollution levels were within safe limits in September. The spike in pollution levels in winters is due to the change in weather and rising number of stubble burning cases in neighbouring states, the Delhi environment minister added.

“We cannot do anything about stubble burning in neighbouring states. So our effort is to reduce vehicular and dust pollution in Delhi through the ‘Red Light On, Gaadi Off’ campaign and anti-dust drives,” he said. Rai said that he had a meeting with Union Environment Minister Bhupender Yadav and it was attended by environment ministers of Punjab, Haryana, Uttar Pradesh and Rajasthan as well.

“We raised our concerns about stubble burning in the meeting. The other state governments did not shoulder their responsibilities properly and that is why stubble burning is happening,” Rai alleged.

The ‘Red Light On, Gaadi Off’ campaign will continue for a month till November 18. As many as 2,500 civil defence volunteers will be deployed in two shifts of 8 am to 2 pm and 2 pm to 8 pm across 100 traffic junctions in the city for the campaign.

According to officials, these civil defence volunteers will hand out pamphlets carrying information on Chief Minister Kejriwal’s three appeals to the people. To help fight the pollution in Delhi, Kejriwal had last week appealed to the people to actively participate in the campaign, avoid using their cars at least one day a week, and report any case of violation of pollution norms on the Green Delhi app.

Later in a statement the minister said that the Delhi government has taken up the responsibility right from the preparation of the Pusa bio-decomposer solution to spraying it in the fields. The microbial decompser solution can turn stubble into manure in 15 to 20 days.

“Had other state governments taken up the responsibility, stubble would not have been burning right now. Air pollution is increasing inside Delhi due to stubble burning.

This campaign will go ahead only with public participation. If we all fight together, then only will we be able to reduce pollution, Rai said in the statement.