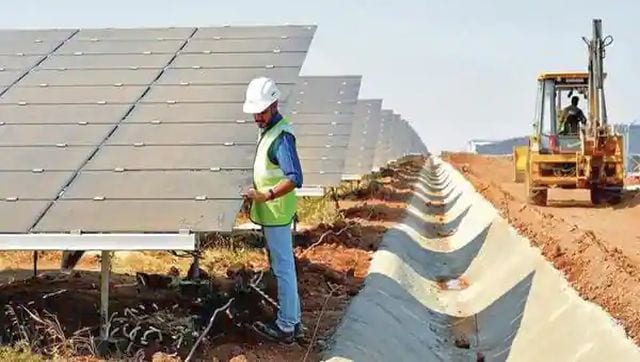 India is the world’s third largest renewable energy producer with 38 percent (136 GW out of 373 GW) of total installed energy capacity in 2020 from renewable sources. AFP

Union Power Minister RK Singh launched the green day-ahead market (GDAM) that is expected to give a fillip to the renewable energy sector of the country.

Here’s an understanding of this new reform introduced by the Narendra Modi-led government.

What is Green Day-ahead market?

As per a statement issued by the ministry of power and renewable energy, the GDAM will enable electricity generation and distribution companies to buy or sell renewable energy through open access.

The power ministry added in its statement that the launch will also provide competitive price signals, besides offering an opportunity to the market participants to trade in green energy, in the most transparent, flexible, competitive, and efficient manner.

Explaining how the system will work, the Green Day-ahead market will operate in an integrated way with the conventional day-ahead market. The Exchanges will offer the market participants to submit bids together for both conventional and renewable energy through the separate bidding windows.

The introduction of GDAM will also help pave the way for India to meet its ambitious target of 450 GW green capacity by 2030.

In 2016 under the Paris agreement, India made the commitment of producing 450 GW, or 40 percent of its total electricity, from non-fossil fuel sources by 2030.

The GDAM comes at a time when the country is facing a shortage of coal.

In fact, the minister stressed that the country needs to decrease its dependence on imported sources of fossil fuel.

Government data showed that as of 6 October, 80 percent of India’s 135 coal-powered plants had less than eight days of supplies left — more than half of those had stocks worth two days or fewer.

Later, on 16 October, Coal India Limited Chairperson Pramod Agrawal, in an interview to India Today, said the situation had improved and there were enough stocks with the CIL to meet demand if any crisis-like situation develops in the near future.