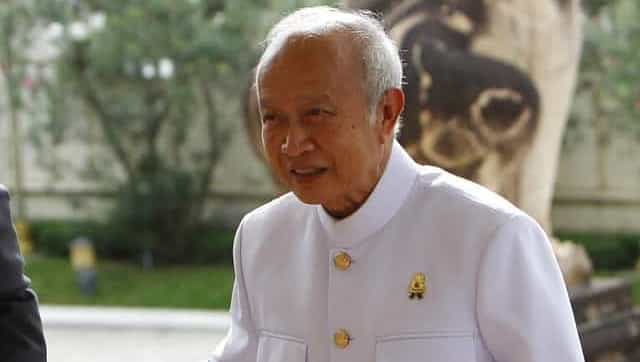 Ranariddh’s career was always in the shade of his charismatic father, Sihanouk, and his wily and ruthless political rival, Hun Sen

Khieu Kanharith, who said he learned of the death from Um Daravuth, a minor member of Cambodia’s royal family, did not give the cause of death.

Ranariddh had been in ill-health since an auto accident in Cambodia in 2018. An aide to Ranariddh, who spoke on condition of anonymity because who was not authorised to speak to the media, said he went to Paris in late 2019 for medical treatment of a broken pelvis.

Ranariddh’s career was always in the shade of his charismatic father, Sihanouk, and his wily and ruthless political rival, Hun Sen, with whom he shared power before being pushed aside. Hun Sen remains prime minister.

Ranariddh traded on his position as the son of Sihanouk, but lacked his father’s strong personality and political adroitness. Ranariddh’s half brother, Norodom Sihamoni, became king in 2004 after the abdication of Sihanouk, who died in 2012. Sihamoni’s Facebook page confirmed Ranariddh’s death.

Ranariddh, a French-educated law scholar, entered public life in 1983, when he took over leadership of Funcinpec, an armed resistance movement against the Vietnamese-installed government led by Hun Sen that succeeded the brutal 1975-79 communist Khmer Rouge regime.

Ranariddh converted Funcinpec into a royalist party that won UN-sponsored elections in 1993. The elections were part of a peace process following the fall of the Khmer Rouge and three decades of civil war.

Hun Sen staged a successful coup in 1997 after two days of combat in the capital, Phnom Penh.

Ranariddh lost his post after fleeing into temporary exile, and Funcinpec fell strongly under Hun Sen’s influence. Ranariddh attempted several comebacks, and in 2006 founded the Norodom Ranariddh Party, but was destined to remain a marginal political player.

Ranariddh’s last position was as the chief advisor to his half brother, King Sihamoni. He was also the leader of what was left of the Funcinpec party, which announced late Sunday that his body would soon be sent back to Cambodia.

Ranariddh’s second wife, Ouk Phalla, a classical dancer more than three decades younger than him with whom he had two children, died in the 2018 car accident.