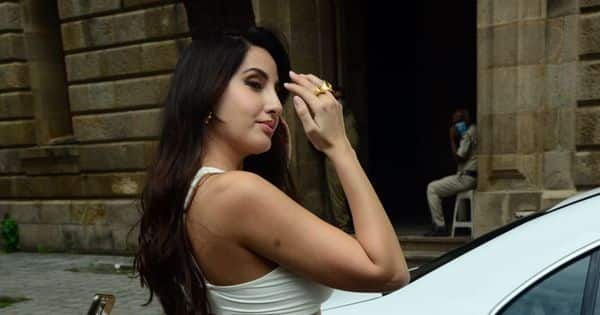 The news is that ED trouble for Nora Fatehi has reportedly mounted. This has happened after they suspect that conman Sukesh Chandrasekhar gifted Nora Fatehi a BMW car worth more than a crore. The conman reportedly splurged on actresses like Jacqueline Fernandez and Nora Fatehi. The name of Sajid Nadiadwala has come up in this matter as per some reports. Nora Fatehi has been called once by the ED, and questioned for more than eight hours in this matter. They might just summon her once again. It was revealed that Sukesh Chandrasekhar was in regular touch with Jacqueline Fernandez and would send her luxury gifts from time to time. Also Read – Anushka Sharma, Alia Bhatt, Katrina Kaif and more – 9 Bollywood beauties who are also talented photographers and click the most viral-worthy pics

It seems Sukesh Chandrasekhar wanted to launch his wife, Leena Maria Paul as an actress in Bollywood. She has worked in the movie, Madras Cafe. He was networking with Bollywood actresses so that his wife could bag a role. Apparently, he assured people that he would take care of the financing so they need not worry a lot. As per some reports, Jacqueline Fernandez’s accounts were thoroughly checked by the ED. Of late, Nora Fatehi has tasted stardom working on films, TV shows and music videos. Her agent said that she was a victim in this whole matter. Also Read – Jacqueline Fernandez and Nora Fatehi summoned by ED in money laundering case – report

Sukesh Chandrasekhar ran a 200 crore money laundering scam from his cell in Tihar Jail. It seems he had tied up with senior officials who helped him with top-notch technology to make it possible for him. He was arrested by the cops in Delhi’s Rohini area after businessmen filed a complaint against him of extortion. It seems Sukesh Chandrasekhar would change his voice and talk to different people. His wife is also under the watch of ED. Nora Fatehi was last seen in the movie Bhuj – The Pride Of India where she played a spy. Also Read – The Kapil Sharma Show: Saif Ali Khan miffed with Kapil Sharma for THIS reason?