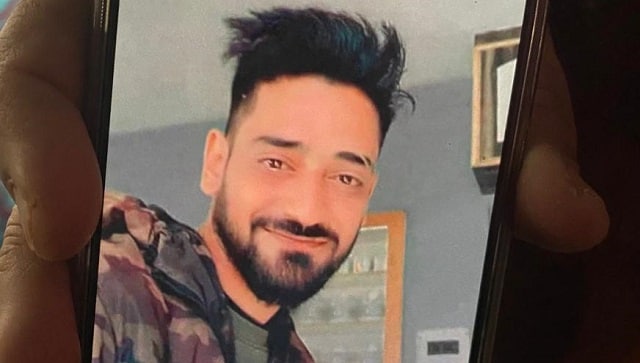 Another Former DGP of Jammu and Kashmir K Rajendra Kumar talked to Firstpost exclusively and said that terror groups always like to spread panic and create a divide so the minorities and immigrants targetted in selective killings are essentially soft targets for them.

The single-storey house of a Jammu and Kashmir policeman, Tauseef Ahmad, is brimming with his friends, well-wishers and family, but the pale of gloom that hangs in the air is a telltale sign. Outside the home, a mentally challenged person in his early 30s mourns the loss of a friend.

Ahmad, 29 and a father of two young children, is the latest victim in the series of targeted killings in Kashmir. According to the police, Ahmad was shot dead by militants at around 8 pm near his residence at SD colony Batamaloo. He later succumbed to his injuries at the Shri Maharaja Hari Singh (SMHS) hospital.

“He was returning from prayers when he was shot. We were watching cricket when someone from outside shouted that Tausif had suddenly collapsed. We went outside and saw him in a pool of blood,” said Aamir Wani, his cousin, who lives in the same area.

Ahmad, a 29-year-old, is survived by his mother, wife and his five-year-old daughter, Zahra and his two-year-old son, Ahmad.

For the past three days, Ahmad’s children have been asking the family when their dad would come back home.  “This breaks our heart. They don’t know where he has gone,” said a family member.

He told Firstpost that Ahmad’s father had died 15 years ago which left him as the sole breadwinner of the family. His colleagues and friends remember Ahmad as kind-hearted and pious. “We still can’t believe that he is dead,” said Wani.

A day after Ahmad’s killing, another Muslim man, Mohammad Ibrahim was shot dead in the Bohr-e-Kadal area. His crime: he worked as a sales manager for a Kashmiri Pandit businessman, Sandeep Mawa.

Mawa is a former doctor, a businessman and also a political activist, who returned to Kashmir in 2019 ahead of the scrapping of Jammu and Kashmir’s special status. He is the owner of the shop Nand Lal Mawa enterprises where Ibrahim, his “close friend” was shot dead in a Mahindra XUV, a vehicle belonging to Mawa.

“I had gone to the shop and was there for some time, then I left at 3pm in my other vehicle,” said Mawa.

He said the killing of Ibrahim is a personal loss for him as he was not just a friend but “family.”

Mawa said he believes he was the actual target of the attack.

“I got a call previously from someone from the police who told me that there is a possibility of an attack on me, so I left as soon as possible,” he said.

Mawa said, the little-known organisation in the Valley, Muslim Janbaaz Force first “claimed” that they had killed him before issuing a corrigendum that they had mistakenly killed Khan.

The Mawas were among those Kashmir Pandits who left the Valley after insurgency erupted in the region in 1989.

Sandeep’s father, Roshan Lal Mawa is a survivor of a 1990 attack, when militancy and anti- pandit sentiment was at its peak. Roshan Lal left the Valley after attack. Mawas are also related to ML Bindroo who was among the 11 civilians killed in the recent attacks in Kashmir.

Fayaz Ahmad, brother of Ibrahim told Firstpost that his brother would manage everything at the shop and was not just a “salesman,”

“All these years Mawas would come to Kashmir for holidays but my brother, who was close to them, would look after his business in Kashmir,” he said.
Ibrahim is survived by two minor children.

“This is extremely sad that militants killed their own people. They want to also threaten the minority but we are a part of this place. Why would we leave this,” Mawa told Firstpost.

Debunking rumours that he was on militants’ radar because he was using his business to settle more Hindus in the Valley, Mawa said that he has always been close to Muslims in the Valley and whenever he could he has provided them with the means to earn a living.

“I don’t ask Hindus outside to come here and help me in business. This is a wrong perception,” he said.

According to Kashmir IGP, Vijay Kumar, who has talked to ANI, “As many as 130 militants have been killed in counter-terror actions, more than 700 overground workers have been arrested in the Kashmir region since the beginning of this year.”

Last month Kumar told reporters that police have several leads about the “hybrid terrorists” and that they were coordinating with security forces to nab such elements.

Several reports suggested that since the cases of civilian killings started in the Valley, 25 companies of CRPF have been deployed and 5 more CRPF companies will be deployed.

Challenges for Jammu and Kashmir Police

Over the past few weeks, Kashmir, especially Srinagar city, witnessed a spike in attacks with most of the incidents being carried out by the pistol-borne local youths, who are not listed as militants with the security agencies.

Officials said that the new trend of “hybrid militants”, who work as part-time militants while continuing to stay unidentified and deeply embedded within civilian society, is becoming a new challenge for the police, which generally keeps a close eye on the movements of suspected militants or their sympathisers.

Shesh Paul Vaid, who was a Director General of Jammu and Kashmir Police from 2016 to 2018, told Firstpost, whatever happens right now is to counter the narrative of normalcy which was being set after article 370 abrogation.

“A narrative was being set even by local political parties that demographic changes would take place. So far nothing like that has happened. No one from outside is willing to come to Kashmir,” he said.

Paul said that the killings are taking place to make sure that the minorities don’t dare to come back.

He also said that almost all counter-terror operations in Kashmir happen based on information provided by Jammu and Kashmir Police that’s why they are also being targeted right now.

Vaid said the situation from the past three decades is the same but it’s just that terror groups are changing their strategies.

Talking about the challenges faced by police right now, he said that It’s very challenging for police unless these modules and outfits are identified.

“Hard intelligence is required to tackle the situation. This is not new and this has been happening for the last three decades and their strategy is the same but the challenges are different.”

Another Former DGP of Jammu and Kashmir K Rajendra Kumar talked to Firstpost exclusively and said that terror groups always like to spread panic and create a divide so the minorities and immigrants targetted in selective killings are essentially soft targets for them.

He said that the recent developments in South Asia, read Taliban’s takeover of Afghanistan, has given some amount of motivation to terror groups. He added that misguided youth in Kashmir are being used as a cannon fodder but the security situation can be better if tackled in a proper way.

“We have removed the security grid which was previously available there only to provide much space to them. What police require at the moment is to put back certain measures, create a better intelligence operative system.”

He also said authorities cannot provide security at every nook and corner. But Jammu and Kashmir police and security forces have to work in synergy.

He added authorities in Kashmir need to tackle the situation from multiple angles.

“We need to move ahead. Intensify the operation, generate actionable intelligence, identify the hybrid militants.” He added that nobody should be killed in Kashmir

“They need to ensure that law and order missionary functions effectively in preventing civilian killings,” he said.