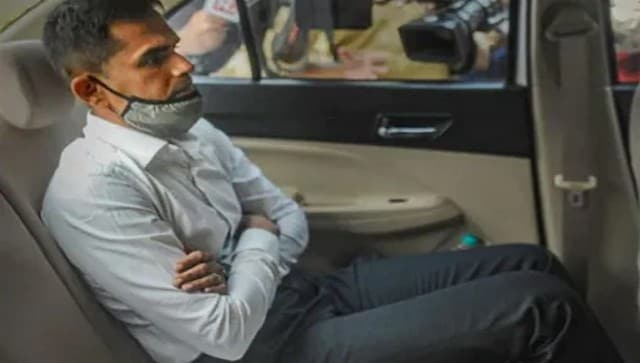 The Narcotics Control Bureau (NCB) and Wankhede had earlier in the day filed two separate affidavits before the special court, designated to hear cases related to the Narcotics Drugs Psychotropic Substances (MDPS) Act, against the allegations of extortion attempt levelled against them

The NCB has ordered a vigilance inquiry into the claims made by a witness in the cruise drugs case of an extortion bid of Rs 25 crore by some agency officials, including its Mumbai zonal director Sameer Wankhede, and others for letting off accused Aryan Khan, son of actor Shah Rukh Khan, while the under-fire IRS officer came under fresh attack from Maharashtra minister Nawab Malik on Monday.

Meanwhile, on the legal front, Wankhede, who the NCB asserted has an impeccable service record, failed to get any relief related to an affidavit on the sensational extortion claims made by the independent witness, Prabhakar Sail, with a special court saying it cannot pass a blanket order barring courts from taking cognizance of the document.

Sail has been provided police protection by the Maharashtra government after he claimed threat to his life.

The NCB vigilance inquiry will be conducted by Gyaneshwar Singh, the agency’s deputy director general (DDG) of northern region.

The Narcotics Control Bureau (NCB) and Wankhede had earlier in the day filed two separate affidavits before the special court, designated to hear cases related to the Narcotics Drugs Psychotropic Substances (MDPS) Act, against the allegations of extortion attempt levelled against them.

The affidavits had sought the court to pass an order saying no court should take cognizance of the affidavit prepared by Sail, who has alleged that Wankhede and others had attempted to extort money from Shah Rukh Khan to let off his son in the drugs case.

In a related development, Bollywood actor Ananya Panday failed to appear before the NCB on Monday for questioning in connection with her alleged WhatsApp chats with Aryan Khan (23), arrested in the drugs-on-cruise case, an official said.

Panday was questioned by the NCB for two days last week and was called again. She was likely to appear before the anti-drugs agency around 11 am on Monday, but did not turn up for the third round of questioning, the official said.

The Central agency, in its affidavit, came out in support of Wankhede, saying It is emphatically stated that the NCB, as an organisation and/or its officers, the zonal director, who has an impeccable service record, replete with honesty and integrity, has no interest whatsoever as falsely alleged in the purported affidavit (of the witness).

The NCB headed by its zonal director and its team were working tirelessly with the sole objective to eradicate the drug menace in the city of Mumbai and act in compliance with the aims and object of this stringent enactment (NDPS Act), to make the city drug free, it added.

As the NCB resolutely backed its officer, there was no letup in attack by Malik, a senior Nationalist Congress Party leader and cabinet minister in the Shiv Sena-led MVA government, who accused Wankhede of forging documents, a claim denied by him.

Talking to a news channel in Nanded, Malik also claimed Wankhede is a Muslim by birth.

“Wankhede’s name is ‘Sameer Dawood Wankhede’, and he is a Muslim by birth. I have published his birth certificate (online). I had to try hard to find it…he got the IRS job on bogus certificate…I shall reveal more such acts of his ‘bogusgiri’,” he said.

Malik also alleged that by “hiding” his religion, he (Wankhede) obtained fake documents and through this, the right of a backward class candidate was snatched.

The NCB zonal director slammed the minister, saying his action was defamatory in nature and an invasion of his family’s privacy.

Wankhede said the minister was invading his family’s privacy, adding there has been personal vendetta against him and his family members. The series of acts of the minister over the past few days have put me and my family under tremendous mental and emotional pressure, Wankhede said in a statement

” I belong to multi religious and secular family. My father is a Hindu and my mother was a Muslim. Publishing of my personal documents on Twitter is defamatory and invasion of my family privacy. Pained by slanderous attacks by Maharashtra minister Nawab Malik,” Wankheded added.

Wankhede, in his affidavit submitted to the court, refuted the allegations levelled against him, and claimed he was under a “lurking threat of arrest as it does not suit some vested interests for conducting an honest and impartial investigation”.

The bureaucrat claimed he was being personally targeted by a well-known political figure (Malik), and the only reason he can fathom is that the NCB had arrested “this person’s son-in-law Sameer Khan” (in a separate drugs case in which is out on bail).

Another Maharashtra minister Jayant Patil said it seems Wankhede had shown himself as a candidate from a “backward community” to join government service and the state government will take appropriate steps regarding it.

Patil said in neighbouring district of Thane, Sameer Wankhede seems to have joined the Union government job by claiming to be from backward class. This is a serious matter and state government will take appropriate steps regarding the same.

The affidavit of Prabhakar Sail is shocking. It appears to be a conspiracy to defame Maharashtra and Mumbai. The videos of arrests (in cruise drugs case) show BJP workers assisting the NCB and helping it take Aryan Khan in custody. This entire conspiracy has one aim, to bring down the MVA government in Maharashtra, Pail claimed.

Many facts in this case have been brought out by minister Nawab Malik. He presented solid proof, he said.

Maharashtra home minister Dilip Walse Patil, speaking to reporters in Mumbai said, Prabhakar Sail has been given police protection. However, as I have not met Nawab Malik yet, I cannot comment on what he had indicated earlier.

Sail visited the Mumbai police commissioner’s office in the morning and met Joint Commissioner of Police (crime) Milind Bharambhe, an official said. He later approached the Sahar police in suburban Mumbai, seeking security whenever he comes to meet his wife, children and mother-in-law, who live in the Sahar village here, officials said.

“I had a brief discussion about this issue (alleged forging of documents by Wankhede) with Chief Minister Uddhav Thackeray. I was here to attend a meeting related to another topic,” Walse Patil said while responding to a question about the meeting.

Shiv Sena MP Sanjay Raut said deliberate attempts were being made to malign Maharashtra through the cruise drugs seizure case, and claimed “some officials will get exposed”.

Speaking to reporters in Mumbai, Raut claimed that a person named Sam D’Souza, seen in some pictures related to the arrest of Aryan Khan, was the “biggest money laundering player in Mumbai”.

“We have received the affidavit and a report from our DDG (south-west region) based in Mumbai and the NCB director general has taken cognisance of this report. He has marked it to the vigilance section for inquiry.

“We are a professional organisation and we are open for inquiry against any allegation against our staffers. The inquiry will be transparent and fair,” top NCB officer Gyaneshwar Singh told PTI.

Asked if Wankhede will continue to probe the cruise case till this inquiry goes on, Singh said the question was “premature and we will take a call as the inquiry progresses, and evidence is gathered.”

Officials said the inquiry will look at all aspects of the claims made by Sail and will also record the version of Wankhede and other officers of the Mumbai zonal unit involved in the ruise drugs case.

The inquiry team may also question Sail, they said.

A three-member team led by Gyaneshwar Singh may travel to Mumbai for “recording the evidence and taking submissions” in this case.

The report of the inquiry will be submitted to the NCB DG. On Monday, the special court said it cannot pass a blanket order barring courts from taking cognizance of the affidavit of the independent witness Sail.

As per the NCB and its zonal director, the allegations made by Sail were only an attempt to create hurdles and scuttle the investigation into the case. The central agency had also sought the court to pass appropriate orders to ensure there is no tampering with the evidence or investigation in the case.

Considering the nature of the relief claimed in the applications (affidavits), no such blanket orders can be passed. It is for the concerned court or authority to pass appropriate order at the relevant stage, the court said.

It added that the matter was subjudice before the Bombay High Court which is scheduled to hear the bail pleas filed by Aryan Khan and his co-accused in the drugs case Munmun Dhamecha on Tuesday.

Therefore, no such orders can be passed by the court as prayed. Hence, the applications are disposed of, the court said.

On Sunday, Sail, in a statement to the media, claimed that Rs 25 crore was demanded by an official of the NCB and other persons, including absconding witness KP Gosavi, to let off Aryan Khan in the case.

Sail told media persons that he had overheard Gosavi telling one Sam D’Souza over the phone, after Aryan Khan was brought to the NCB office following the October 2 raid on the cruise ship, about a demand of Rs 25 crore and “to settle at Rs 18 crore as they have to give Rs eight crore to Sameer Wankhede”.

Sail had said he would soon release evidence to support his claim.

Wankhede’s affidavit claimed personal vendetta against him and his family members. The IRS officer said he was ready to face a probe to prove his innocence.

Special public prosecutor for the NCB, Advait Sethna, submitted the affidavits before the special court.

Sethna told the court that Sail was threatening to release some evidence which would hamper the case and hence, appropriate orders should be passed.

An NCB team led by Wankhede earlier this month allegedly seized drugs onboard a cruise ship off the Mumbai coast following which Aryan Khan and some others were arrested on 3 October.