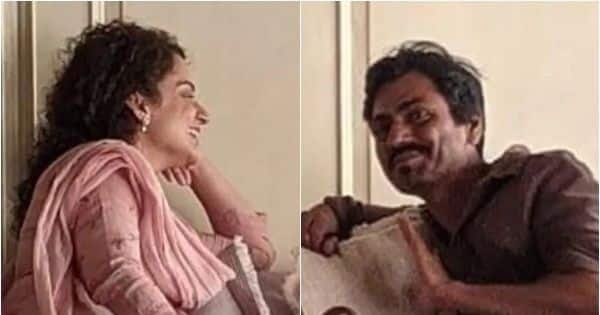 Kangana Ranaut has been at loggerheads with the film fraternity for a long time now. She becomes the talking point every time she criticizes her industry colleagues. From alleging 99 per cent of Bollywood consume drugs to calling out big stars for not supporting her films publicly, Kangana never fails to hit headlines for all controversial reasons. When Nawazuddin Siddiqui was asked about her opinions against the film industry, he said that it is her thought process and he is no one to question her. Also Read – Trending Entertainment News Today: Kangana Ranaut claims her Padma Shri will ‘shut mouths’, Shah Rukh Khan’s manager Pooja Dadlani summoned by Mumbai Police in Aryan Khan case and more

“It is her thought process and I am no one to question her. I know her as an actor and she is simply amazing and bl**dy brilliant at her job. Kangana has given some of the finest performances in the past few years. As a person too I like her a lot. She is really a sweet person. Also, every human being has a different thought process and I don’t think that should be a problem to anyone. What I really like about her is that she is really passionate towards her work and wants to excel in eveyrthing that she does,” Nawazuddin told News18. Also Read – Trending OTT News Today: Badshah sings for The Rock in Red Notice, Kangana Ranaut launches the quirky first look of Tiku Weds Sheru and more

A couple of days ago, Kangana treated her fans with the first look of her maiden production venture Tiku Weds Sheru starring Nawazuddin Siddiqui and Avneet Kaur. She shared a poster introducing actress Avneet Kaur, who is known for playing Princess Yasmine in ‘Aladdin – Naam Toh Suna Hogaand’ and Charumati in ‘Chandra Nandini’. Avneet is playing the role of Tiku in the film. Also Read – Kangana Ranaut shares video after receiving Padmashree award, ‘It will shut lot of mouths’ – Watch

The film is directed by Sai Kabir and will be produced under Kangana’s production house Manikarnika Films. This will be her maiden digital venture. It will be released on Prime Video. It was being said that Kangana was earlier keen to produce the film with the late Irrfan Khan in the lead.