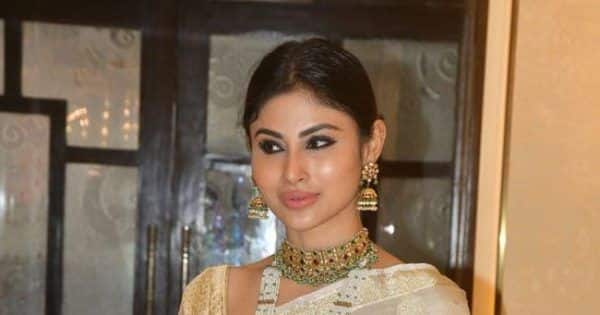 Mouni Roy is one of the celebs who is slated to tie the knot in 2022. It seems the actress and her beau, Suraj Nambiar are going to marry in the month of January 2022. As per a report in ETimes, January 27 has been finalised as the date. The pre-wedding rituals will happen on January 26. The couple are yet to decide if they will marry in Italy or Dubai. These two destination are on the list. Her cousin had revealed that she plans to throw a reception for family members in Cooch Behar, which is her hometown. The two have been together for more than two years now. Also Read – Bhediya, Cirkus, Brahmastra, Laal Singh Chaddha and 5 other eagerly awaited big Bollywood movies’ new release dates – view pics

Mouni Roy has been shuttling between Dubai and Mumbai of late. She has never confirmed her relationship with Suraj Nambiar. The rumours started floating after he was seen at her birthday celebrations in the Maldives. A graduate from an Ivy-league university he is a finance consultant in Dubai. He is a part of a top-notch financial institution. In the above picture, we can see him with Rohini Iyer, who is Mouni Roy’s publicist and a good friend. It seems Mouni Roy’s mom met Suraj at the residence of Mandira Bedi who is a good friend of Mouni. The actress is very fond of his parents too. Also Read – Salman Khan, Sunny Leone, Sonakshi Sinha and 6 other Bollywood celebrities who’re as good at painting as they’re at acting – view pics

The actress was earlier dating her co-star Mohit Raina. They parted ways after three to four years together. There is not a single picture of the two together on her social media. But on her birthday, she thanked him for gifting her a pup. Also Read – Nia Sharma, Mouni Roy, Hina Khan and more – Check out top 12 most sensuous TV divas right now