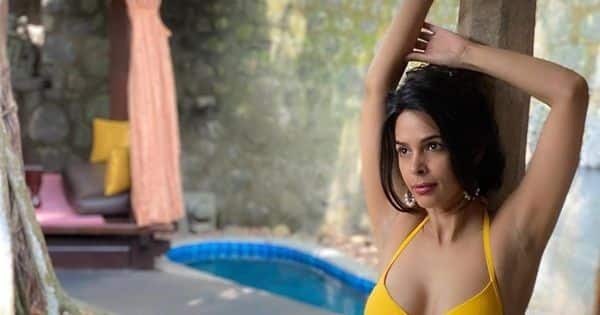 Mallika Sherawat never shies away from giving a glimpse into her love life. She recently opened up about being in a happy space of her romantic relationship and also spilled some of anecdotes about them. Though Mallika didn’t reveal his identity, she talked about how her boyfriend complains about her nighttime habit. Also Read – When ‘Murder’ girl Mallika Sherawat raised eyebrows with her bold statements

During her appearance on The Love Laugh Live Show, Mallika said that she and her boyfriend met in France while on a vacation. There were both holidaying with their respective friends in Saint-Tropez and stayed at the same hotel. She confirmed that she committed in her relationship and they were in it for the ‘long haul.’ Also Read – Nakaab actress Esha Gupta opens up on the ‘DARK SIDE of what industry people go through’ [EXCLUSIVE VIDEO]

When Mallika was asked if she was too busy for a relationship, she replied saying that she has a great love in her life. “Yes, in the beginning of my career, I was working and I was really busy but one evolves and one grows, and now, I am in a very comfortable place in my life. Love plays a huge part,” she said. Also Read – Bollywood’s Daring Darlings who made heads turn in see-through dresses

While talking about her glamorous onscreen image, Mallika said that everybody assumes that she parties and drinks but she is totally opposite. As she spoke, she went on to reveal how her spiritual way of living keeps her boyfriend complaining about her habit. ““I don’t like the party culture. I am more into a spiritual way of living, a holistic way. I love to sleep early. My boyfriend is always complaining, ‘Oh my God, are you a nun? You are always sleeping early. What is wrong with you?’” she said.

Mallika was previously in a relationship with her French boyfriend Cyrille Auxenfans. She had shared a few lovey-dovey pictures with him on social media. However, the two had landed in trouble allegedly over their financial issues. It was reported that they had faced eviction crisis from their luxury apartment in Paris and they owed nearly 80,000 euros (approximately Rs 61 lakh) in unpaid rent.

Mallika had denied all the reports and said in a statement that she don’t know why her name was being dragged into the matter. Later, she also cleared the air saying that Cyrille Auxenfans, who was being claimed to be her husband, was just her friend.

On the work front, Mallika was last seen playing the role of Zohra Mehra, a leading and influential TV producer in the web show Nakaab. She will be seen next in RK/RKAY, directed by Rajat Kapoor.