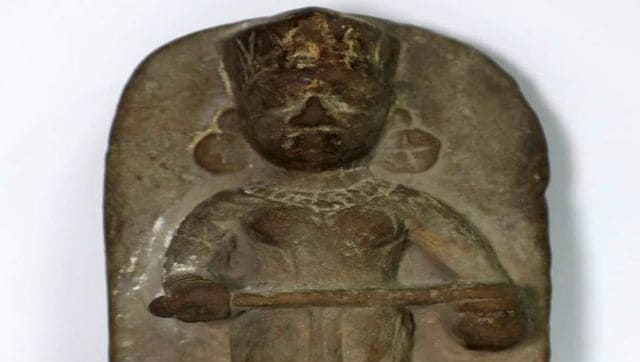 The statue, which was found in Canada, will be installed at the Kashi Vishwanath Temple on 15 November

The stone idol of Goddess Annapurna was stolen about 100 years ago. ANI

An idol of Maa Annapurna that was stolen from Varanasi about 100 years ago and later found in Canada recently was handed over to the Uttar Pradesh government today.

The idol will be installed at the Kashi Vishwanath Temple on 15 November.

Speaking to news agency ANI, Union Minister of State Meenakshi Lekhi said, “An idol of Maa Annapurna, which was stolen from Varanasi about 100 years ago was retrieved from Canada recently. The idol will be installed at Kashi Vishwanath temple on 15 November.”

The idol which first landed in New Delhi will be received with fanfare at four places including Kasganj, Kanpur, Ayodhya and Kashi. “People will be given an opportunity to do darshan,” Additinal Chief Secretary Awanish Kumar Awasthi was quoted as saying.

Delhi | The idol of Goddess Annapurna which was retrieved from Canada begins its journey to Kashi Vishwanath Temple in Uttar Pradesh’s Varanasi. The idol will be installed at the temple on 15th November. pic.twitter.com/U53eeJ2cso

Maa Annapurna, is considered the Goddess of food and nourishment.

The idol was received by India from Canada on 15 October.

Explaining how the idol made its way to Canada, Chief Minister Yogi Adityanath was quoted as saying, “A 100 years ago an idol of Maa Annapurna was stolen from Kashi. It ended up at a university in Canada with the exchange of hands. The government of India has received that idol from the University, it is now being given to the Government of Uttar Pradesh.”

Union Minister for Tourism and Culture G Kishan Reddy said that Prime Minister Modi has arranged for 55 idols, sculptures and paintings to be brought back from various foreign countries.

“Idol of Goddess Annapurna stolen and taken to Canada about 100 years back is being brought back to India and will be placed in Kashi Vishwanath temple on 14 November,” he said.

The return of the idol comes at a time when many such antiquities are being identified and being returned to India.

Recently, 157 artefacts and antiquities were handed over to India during Prime Minister Narendra Modi’s visit to the United States. The list of 157 artefacts includes a diverse set of items ranging from the one-and-a-half metre bas relief panel of Revanta in sandstone of the 10th CE to the 8.5 cm tall, exquisite bronze Nataraja from the 12th CE.

Government sources said that only 13 antiquities were retrieved by India from different countries between 1976 and 2013.

However, between 2014, when Modi came to power, and 2021, over 200 antiquities have either returned or are in the process of being returned, they added.