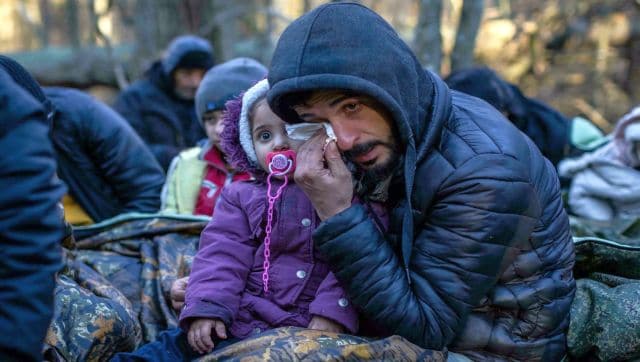 Kurdistan, an autonomous region in northern Iraq, presents itself as a haven of relative stability, but is regularly criticised for restricting freedom of expression

Members of a Kurdish extended family from Dohuk in Iraq, near Narewka, Poland. They said they spent about 20 days in the forest and were pushed back multiple times to Belarus where they claim they were beaten by soldiers. AFP

Arbil: “Our life is awful,” says Iraqi taxi driver Himen Gabriel, who no longer believes he has a future in his war-battered country and says he is about to try to reach Europe.

He won’t say whether he will try to enter the European Union across the Belarus-Poland border like thousands of others, but is determined to leave his home in Arbil in Iraq’s Kurdistan region.

Sporting a long, black beard and a fashionable haircut, Himen, 28, says he has no professional prospects, blaming local systems of patronage and nepotism.

He pointed to his four brothers, saying “all have degrees and none has found a job in the public sector because they do not belong to any political party”.

He prefers not to say whether his travel itinerary will include Belarus where up to 4,000 migrants, many of them Kurds, now huddle in improvised camps in freezing weather.

As troops mass on both sides of the border, Poland has accused Russia of orchestrating a wave of migrants trying to illegally enter in a bid to destabilise the European Union.

One Iraqi man now in Belarus, who asked not to be named, told AFP by telephone that he and his family had made it all the way to the razor wire fence at the Polish border.

When they arrived, he said their group was confronted by “Polish soldiers” on the other side. “We tried to cross,” he said, “but the soldiers fired tear gas to force us back.”

Now back in the capital Minsk, he said he remained in contact with relatives living inside the European Union, eager to find another way to enter and cross to Germany.

Gabriel, the taxi driver, remains convinced that even an arduous and dangerous journey is worth it, given the prospect of “leading a quiet life” in Europe.

On Wednesday evening, the Kurdish regional government said it wanted to tackle the “root causes” of migration by “creating more job opportunities for the youth and improving the quality of life for all people”.

Kurdistan, an autonomous region in northern Iraq, presents itself as a haven of relative stability, but is often criticised for restricting freedom of expression.

The region has been ruled for decades by two parties, the Patriotic Union of Kurdistan and the Kurdistan Democratic Party.

Last May, the UN denounced “arbitrary arrests”, unfair trials and “intimidation of journalists, activists and protesters” in Iraqi Kurdistan.

About 3,000 Kurds have left the region in the past three months, of whom 1,600 have gone to Belarus on tourist visas, according to the Kurdistan Refugee Association.

The Belarus honorary consul in Arbil, Fouad Mamend, told AFP that they were using travel agencies to obtain tourist visas and tickets for indirect flights to Minsk, since direct flights had now been halted.

He added that the Belarus missions in Arbil and in Baghdad had now been “closed for a week at the request of the Iraqi government”.

The head of the foreign relations committee in Kurdistan’s regional parliament, Rebouar Babki, said “initiatives are underway to bring these migrants back… but some of them are not in favour of returning”.

In Baghdad, the federal government said it would allocate $200,000 dollars “to help Iraqis stranded in Belarus, Lithuania and Poland”.

Belarus is also the immediate destination for Hiwa Fariq Mohammed, a printer in Sulaimaniyah in eastern Kurdistan.

After four unsuccessful attempts to try to reach Europe, he said he will keep trying.

“I want to leave because of the lack of security and the difficult economic situation,” the 44-year-old told AFP. “I want to ensure a better future for my son and daughter.”

Another local man, Diler Ismael Mahmoud, 55, was grieving his son’s death. He said Kilan, 25, died less than two weeks ago in Belarus, while planning to enter Poland with a trafficker.

“He had diabetes and a spinal cord disease,” the father said.

The tough journey in harsh weather killed Kilan, who had set off with two brothers, his sister, her husband and their five-year-old child in the hope of reaching Germany.

“We thought this route was easy,” compared to risky Mediterranean crossings, said the bereaved father.

“Many have done it and they say it is a safe route, with a four-hour walk.”

Today, he said, his daughter is being treated in Poland after breaking her leg during the journey, while the rest of the family is stuck in Belarus, awaiting an uncertain future.