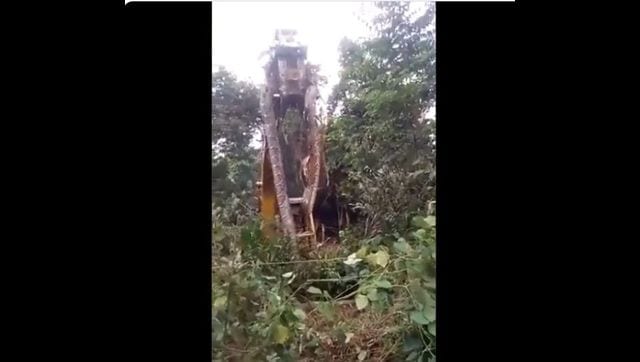 According to several news reports, this snake could be the world’s largest-ever on record

Social media is usually flooded with snake photos and videos but the recent one is here to shock you. A jaw-dropping video has currently gone viral which shows a massive snake being lifted out of its rainforest home with the help of a crane.

For the past two days, this video has been doing the rounds on the internet and has left millions of people amazed and stunned by the size of the snake. According to several news reports, this snake could be the world’s largest-ever on record.

As the video surfaced on social media, there were many news portals that incorrectly reported that the massive snake was discovered in FCI Sindri in Dhanbad, Jharkhand. Later, Navbharat Times notified that the snake had not been found in Jharkhand.

Dhanbad’s local administration clarified the same stating that no such snake was found in any part of the district. He also notified that there was no such instance of lifting a snake with a JCB machine took place in the city.

However, The New York Post claimed that the snake was found by workers who were clearing part of a Dominica rainforest. For the unversed, Dominica is a Caribbean paradise that measures 29 miles long and 16 miles wide. This Caribbean land has also been termed as “Nature Island” all thanks to its wide collection of wildlife.

Furthermore, it is not very clear what kind of snake has been captured in the viral video, but as per the publication, the boa constrictor is one species that is native to the Caribbean Island. Also, these snakes can grow up to 13-feet long.

The video was reportedly shared on TikTok by @fakrulazwa. It has been viewed more than 79 million times on the platform. Later, on the same account, another video showcased people struggling to fit the snake inside a car.