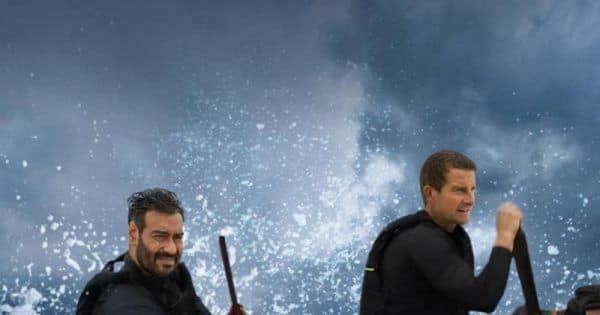 Bear Grylls’ name is synonymous with both adventure and survivalist techniques in some of the world’s toughest terrains. His show, Into the Wild, on discovery+, explores everything from the deepest jungles and most barren deserts to the frigid zones and uninhabitable islands, showcasing what it takes to make it out with the bare minimum, using what nature provides, and facing all kinds of perilous odds with fortitude and quick thinking. Recently, Bear Grylls has featured guest stars like Rajinikanth and Akshay Kumar in his Into the Wild specials, and the outcome has been quite pleasant both for the show’s and actor’s fans. This time around, it’s Ajay Devgn who accompanies him. So, how’s their adventure? Read on to know more… Also Read – Trending Entertainment News Today: Somy Ali makes a strong statement on Aryan Khan’s drugs case; Sara Ali Khan brutally trolled for her awkward posture and more

Ajay Devgn guest stars in a special Into the Wild episode with Bear Grylls on discovery+, where they enter an uninhabitable island and use what they can find on it to make their way out.

Watch the Into the Wild with Bear Grylls & Ajay Devgn trailer below:

The best parts of the episode are (proceed with caution; major spoilers ahead) Anil Kapoor, Rohit Shetty and Kajol‘s special, recorded messages for Ajay Devgn, followed by a few shots of the superstar eating raw fish and then, no more than a tease of being in the ocean with some sharks for company. Of course, Ajay Devgn’s magnetic personality and raw screen charisma make up for the rest.

Lets be completely honest here: Both Rajinikanth and Akshay Kumar’s special with Bear Grylls were far more engaging, encountered more dangers and were bound to please their fans better. Besides a few reef sharks, which truth be told are no great whites, bull sharks or even tiger sharks – they’re literally the puppies of the species, never know to have ever fatally injured a human – Ajay Devgn and Bear Grylls don’t cross paths with a single animal or insect that poses a threat. The island itself they land on feels relatively small and easy to traverse and their escape plan almost feels as if it was waiting there for them to be assemble and get out like a lego building set. This one isn’t going to please either Devgn or Grylls’ fans.

If you want to watch either Ajay Devgn or Bear Grylls partake in actual adventurous stuff, we suggest you watch one of the many exciting movies of the former or one of the earlier thrilling episodes of the latte. Barring a few mildly enthusing moments, Into the Wild with Bear Grylls and Ajay Devgn just doesn’t cut it.