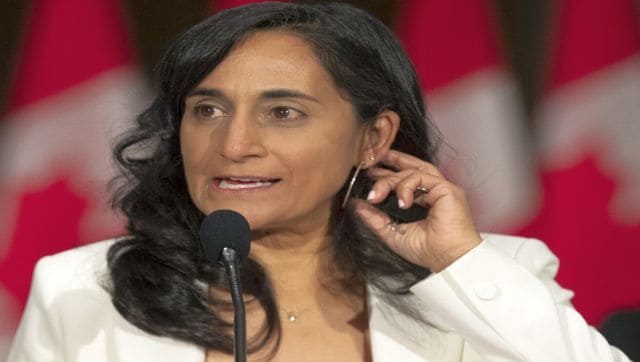 Anand will replace long-time defence minister Harjit Sajjan, whose handling of the military sexual misconduct crisis has been under criticism

Newly sworn in Minister of National Defence Anita Anand is the second woman to hold this portfolio since Kim Campbell in the 1990s. AFP

Prime Minister Justin Trudeau overhauled his cabinet on Tuesday and named women to the foreign affairs and defence posts in the gender-balanced group of the government’s top officials.

As Anand prepares herself for a tough task, here’s all we know about her.

Who is Anita Anand?

The first Hindu cabinet minister Anita Anand has made history by becoming Canada’s second ever woman defence minister since Kim Campbell in the 1990s.

Anand, of Tamilian-Punjabi heritage, was a professor at the University of Toronto Faculty of Law specialising in corporate governance and the regulation of capital markets before her political career.

In 2019, Anand made a successful foray into politics when she was elected as a rookie member of Parliament representing Oakville in Ontario province.

Anita assisted the Air India Inquiry Commission with extensive research. The commission investigated the bombing of Air India Kanishka Flight 182 on 23 June, 1985, which killed all 329 people on board.

The bomb that exploded on board the Montreal-Delhi flight was planted by Vancouver-based Khalistanis to avenge the military action at the Golden Temple a year earlier in 1984.

Shortly after being sworn in, Anand, speaking to CTV News, said she would be relentless in her pursuit to shift the culture within the military so those in uniform feel safe, while restoring Canadians’ trust in the institution.

It is my sincere honour to be sworn in today as Minister of National Defence. Thank you @JustinTrudeau for entrusting me with this portfolio. pic.twitter.com/4QpXA5hcL6

“My top priority is to make sure that everyone in the Armed Forces feels safe and protected and that they have the support that they need when they need it and the structures in places to ensure that justice is served,” she was quoted as saying, adding, “I am thorough, I am determined, I am dogged, and I am results-oriented. I will be dedicating all of my energies towards this task.”

“Minister Anand has been a proven leader in a time of crisis…someone with the success of working through crisis is absolutely necessary now,” she said.

Anand’s elevation to defence minister comes at a time when the Canadian military is under pressure for how it has dealt with sexual misconduct charges.

The previous defence minister Harjit Sajjan has faced criticism for his handling of allegations of sexual misconduct levied against high-ranking officers and his inability to make sufficient change.

According to a report in Global News, defence experts noted that moving Anand into the role would send a powerful signal to survivors and victims of military sexual misconduct that the government is serious about implementing major reforms.

Another challenge that Anand will have to overcome is retrieving the remaining Afghans who have been left behind in now Taliban-controlled Afghanistan.

Trudeau on elevating Anand to the post, had said, “The women and men who serve in the Armed Forces deserve better support, deserve a shift in the kind of governance they have and one of the things people will be learning about Anita Anand in the coming months is she’s a world class expert in governance.”