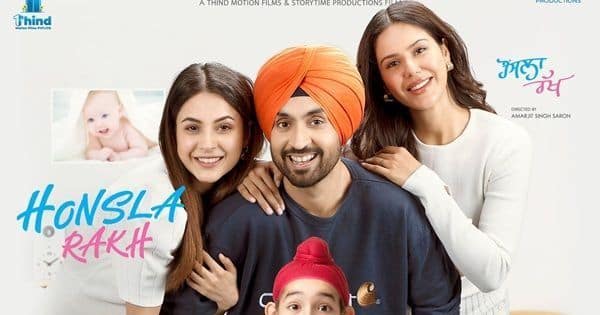 As Bollywood struggles to get back on its feet, Shehnaaz Gill, Diljit Dosanjh and Sonam Bajwa’s Punjabi film Honsla Rakh has become the number one ‘North Indian of the year’ within two weeks of its release. The movie has outperformed despite Covid-19 restrictions and theatres running on 50 per cent occupancy. It has earned Rs 38.15 crore worldwide in 11 days at the box office. Also Read – Deepika Padukone, Ayushmaan Khurrana, Disha Patani and other Bollywood stars who ‘purple’ BTS and are a part of the ARMY

#HonslaRakh Madam Ji Can You Correct My Poje ??

He also shared an update about his film’s release in Australia as threates have reopened. He shared the list of theatres in Melbourne in his tweet and encouraged people to watch the movie which will release on October 28. “#HonslaRakh Melbourne Australia Flag of Australia Theaters Open Ho Gaye Guys..This week Chak Fatte Deo Smiling face with smiling eyesFolded handsFolded hands ENJOY WITH YOUR FAMILY.” Also Read – Shehnaaz Gill agreed to do Honsla Rakh for THIS person and no, it was not Sidharth Shukla

Not just this, but Honsla Rakh has managed to perform better than Akshay Kumar‘s Bell Bottom, Janhvi Kapoor‘s Roohi and other recently released Hindi films. It also received the highest Punjabi opening ever making Rs 2.55 crore on its first day itself. With this feat, Diljit broke his own record beat his previous film Shadaa which was the highest Punjabi opening film ever.

Diljit and Sonam Bajwa have been popular as a pair in the dance track titled Tommy, which featured in the 2019 hit, Shadaa. Honsla Rakh also features Gippy Grewal‘s son Shinda Grewal.