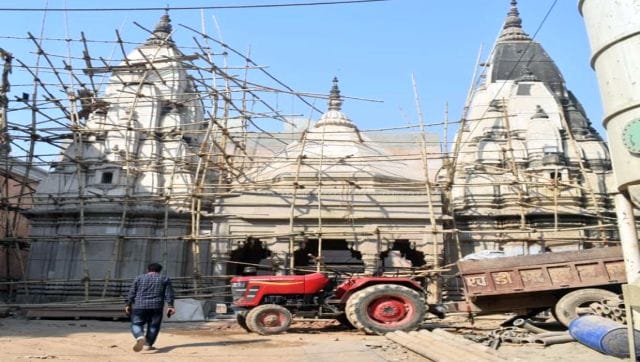 The Ram Temple at Ayodhya may only be ready by the end of 2023 before the general elections, but the Kashi Vishwanath Dham project in Varanasi, linking the Lalita Ghat on the river bank to the Kashi Vishwanath Temple, will be inaugurated by Prime Minister Narendra Modi on 13 December ahead of the Uttar Pradesh polls.

News18 witnessed hectic work on at the site on Friday with workers saying they are working day and night to complete the project by 10 December. Around 400 additional workers have been brought in to fast-track the job.

Multinational firm Ernst & Young has been given the job of handling the operational planning, ensuring a “memorable pilgrim experience” and derive the best possible use for the operational area. The project is top on the BJP’s priority list for the UP elections as it is in the prime minister’s constituency.

“The Opposition used to target us saying that we never tell the date on which Ram Temple will be built in Ayodhya. But now the Ram Temple is also being built and the Kashi Vishwanath Corridor project is also ready,” BJP state chief Swatantra Dev said about Home Minister Amit Shah’s address to party leaders on Thursday in Varanasi.

The BJP is planning a grand unveiling event for the corridor during the PM’s visit next month. “The jal abhishek will be done by bringing water from all prominent rivers of the country. Priests from all the Jyotirlings will come here for the ceremony. The Ghats of Kashi will be decorated for the day,” BJP’s co-convener of social media in UP, Shashi Kumar, said.

Modi had launched the Rs 400-crore project in his parliamentary constituency in March 2018, which is being anchored around Lord Shiva’s ancient Kashi Vishwanath Temple.

The idea is to preserve existing heritage structures, provide new facilities in the temple complex in the public-private partnership mode, ease the traffic and movement of people around the temple and connect the temple with Ghats with direct visibility. Hundreds of small temples were discovered during the ongoing work which have been preserved and made a part of the corridor.

What’s being built in the corridor?

The idea is to have 20-25 feet wide corridor from the Lalita Ghat in Varanasi to the Mandir Chowk in the temple premises to enable at least two lakh people to be present at a given point of time. The project involves building multiple amenities for pilgrims such as Yatri Suvidha Kendras, guesthouses, hospice, library, and museum.

The project has public toilets and provides for a good number of them at places pilgrims throng to, plans for extensive security arrangements, and a widened emergency entrance for vehicles and ambulances to enter the temple area.

The core aim is to ensure easy pedestrian movement for pilgrims with the least wait, travel and walking time, and comfortable holding zones, as well as crowd management and emergency operational procedures and better experiences around the religious rituals.

Officials said most of the infrastructure is ready at the project site and mainly finishing works are on.

News18 found that besides the finishing works, a war-scale effort is also on to remove debris from the corridor and take it out with the help of trucks. White marble has been used in an area of almost 43,000 square feet.