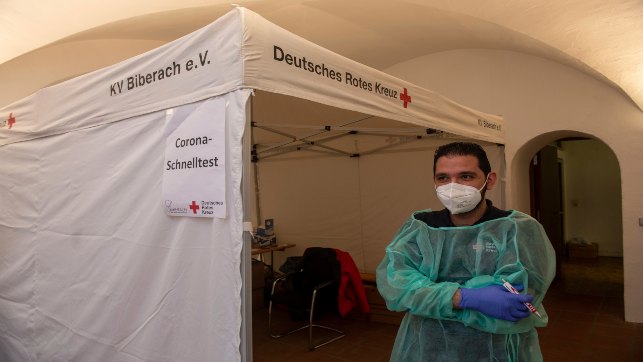 Red Cross worker Motasen Edrees stands in front of a tent at City Hall where he performs Corona rapid tests in Biberach, Germany, on Wednesday. AP

deaths, bringing Germany’s pandemic death toll to 97,198. One of the country’s top virologists, Christian Drosten, warned on Wednesday that another 100,000 people could die in the coming months if the country’s vaccination rate didn’t accelerate quickly.

Unlike some other European countries, Germany has balked at making vaccinations mandatory for certain categories of workers and has struggled to persuade more people to voluntarily get shots.

At least 67 percent of the population of 83 million is fully vaccinated, according to official figures.

“In Germany, I must say, unfortunately, that our vaccination rate isn’t high enough to prevent the fast spread of the virus,” Chancellor Angela Merkel said late Wednesday.

Vice Chancellor Olaf Scholz who is likely to take over as chancellor echoed Merkel, telling lawmakers that everything must be done to get more people vaccinated.

“The virus is still among us and threatening our health,” said Scholz. “We must make sure that vaccinations are conducted and that they are conducted at high speed.”

A caretaker national government has governed Germany since a September parliamentary election. The three parties that are expected to form the new government are looking to replace a March, 2020 “national epidemic” declaration at the end of the month with new legislation for enacting COVID-19

Scholz announced that the three parties – his own Social Democrats, the Greens and the pro-business Free Democrats – plan to to re-open vaccination centers across the country so that people can receive booster shots swiftly.

Other virus measures include free tests, daily or frequent testing at nursing homes and schools and tougher enforcement of measures.

Germany has had a patchwork of regional rules throughout the pandemic. Most places permit access to many indoor facilities and events only to those people who have been vaccinated, have recovered from COVID-19

or had a recent negative test.

Scholz said both he and Merkel agreed that the federal government and all 16 states need to meet again next week to find common solutions on how to counter the infection spike.

“That is what we need now: for the country to stick together and pull in one direction so that we can get through this winter,” said Scholz.