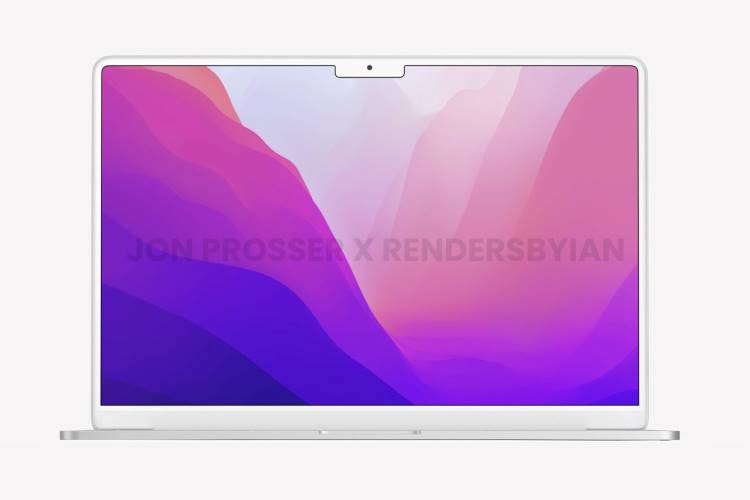 While Apple brought back the usual set of ports and MagSafe charging with its latest M1 Pro and M1 Max MacBook Pro lineup, the most surprising addition was an iPhone-like notch to the notebooks. Although the company recently explained how users can hide the notch on their new MacBook Pro devices, the design has become quite controversial amongst the community. Now, tipsters claim that Apple might add the same notch to the next MacBook Air. Moreover, the leaks suggest that it will be a white-colored notch instead of the black ones on the latest 14-inch and 16-inch MacBook Pro.

Apart from the fact that the next MacBook Air could come with a notched display, it is somewhat weird to think that the notch, as well as the bezels, will be painted in white instead of black. Moreover, Apple might also include an all-white keyboard on the upcoming MacBook Air to match the whole theme. And here is why the rumors could all be true.

Back in May this year, reputable tipster Jon Prosser suggested that Apple is aiming to introduce the next MacBook Air models in various color options, much like the latest iMac from earlier this year. The rumor was further corroborated by Apple analyst Ming-Chi Kuo and later verified by another tipster named Dylandkt.

Now, both Prosser and Dylandkt claim that the bezels and notch on the upcoming colorful MacBook Air models will be white or “off white”, matching the bezel color of the latest iMac models, which Apple calls “light gray”. So, why go with white bezels and a white notch instead of the black ones like on the latest MacBook Pro variants?

Well, at the time of the launch of the new iMac models earlier this year, Apple explained that the white-colored bezels are to match most home decors and blend into the users’ working environment. “The borders are meant to complement the typical home design, for one, and blend into the background. The lack of the stark contrast provides a more seamless experience for the user,” stated Colleen Novielli, the Head of Product and Marketing at Apple, in an interview.

So, Apple says that white bezels are for casual users who work on their MacBook devices at home or an office, both of which are brightly-lit environments. Whereas the black bezels on the MacBook Pro models are better for the creative and professional users who tend to work in darker environments.

Hence, it is very much possible that Apple wants to categorize its MacBook devices for pro and casual users with white and black bezels and notches. As a result, the existence of the white notch and white bezels on the upcoming MacBook Air model is highly likely. Would you like using an all-white MacBook Air with a white notch on the display? Or, do you think Apple should stick to the dark notch and bezels? Do let us know your thoughts in the comments below.