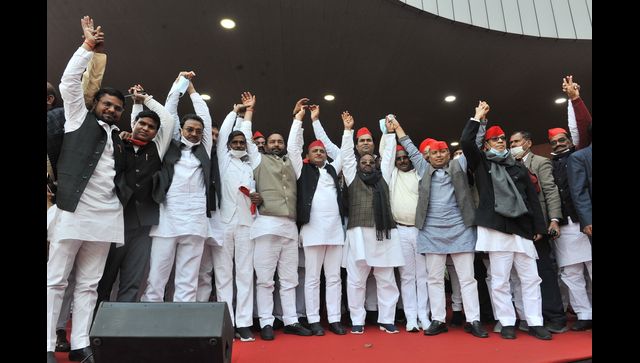 Lucknow: A case was registered on Friday after a massive crowd, in violation of Covid norms, gathered at the Samajwadi Party office here for the joining-in function of two rebel ministers and some MLAs.

The FIR was registered according to the directives of the Election Commission on Covid-related norms, officials said.
Former ministers — Swami Prasad Maurya and Dharam Singh Saini — besides five BJP MLAs and one from the Apna Dal (Sonelal) joined the Samajwadi Party (SP) in the presence of its president Akhilesh Yadav.

The FIR was registered at the Gautam Palli police station against 2,000 to 2,500 unknown Samajwadi Party activists for violation of Covid norms at the party’s office, Lucknow Police Commissioner D K Thakur said.

On the complaint of Sub Inspector, Gautam Palli police station, Ajay Kumar Singh, the case was registered under Indian Penal Code sections 188 (violation of instructions), 269 (spreading infection of disease), 270 (endangering the life of others by spreading infection) and 341 (wrongful restraint of a person).

The FIR also has charges mentioned under the Disaster Management Act and the Epidemic Diseases Act.
The sub-inspector has alleged in his complaint that 2,000 to 2,500 SP workers blocked the road by parking vehicles haphazardly around the party’s headquarters and illegally organised the gathering, Thakur said.

It has also been said in the complaint that through loudspeakers, the SP’s workers were asked to clear the crowd and to remove vehicles but there was no effect.

Singh has alleged violation of the election code of conduct and Covid norms. Video clips showed hundreds of party workers gathered at the SP office and a majority of them not wearing masks.

“Prima facie, there was violation of COVID-19 norms, and investigations are underway. A team of officials of the district administration and police had gone there,” a senior official of the Lucknow district administration said.
When asked about action being taken in the matter, Lucknow District Magistrate Abhishek Prakash had told PTI, “Action as per law is being taken.”

The Election Commission has banned public rallies, roadshows and corner meetings till January 15 in the five poll-bound states, citing the fresh surge in Covid-19 cases, and issued stringent safety guidelines.

The Commission listed out 16-point guidelines for campaigning as it banned ‘nukkad sabhas’ (corner meetings) on public roads and roundabouts, limited the number of persons allowed for the door-to-door campaign to five, including the candidate, and prohibited victory processions after the counting of votes.

Capital Lucknow and other parts of Uttar Pradesh have been also witnessing a spurt in coronavirus cases .