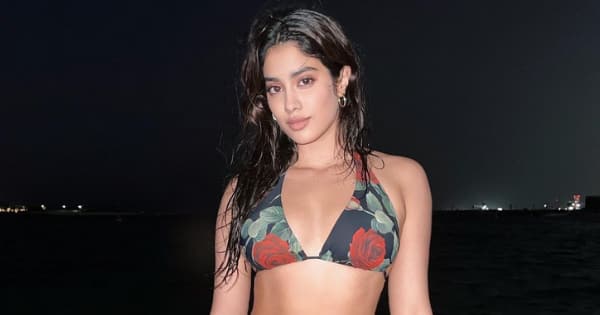 Sridevi and Boney Kapoor‘s daughter and actress Janhvi Kapoor is winning hearts on Instagram and how! The Roohi actress is currently vacationing abroad. Janhvi has been sharing some amazing pictures from her trip with her friends and family. After sharing pictures from their desert safari, Janhvi Kapoor has dropped some bikini pictures on her gram now. The actress is seen posing on a beach with a silhouette backdrop of the location. The red, black and green floral bikini look dope on the actress. It has a bandeau top and a sarong. However, it’s the caption that’s got everyone’s attention and made the Gunjan Saxena actress’ post go viral. Also Read – From her enviable legs to her ample bosom – 9 times Janhvi Kapoor left fans out of breath with her too hot to handle avatars

Janhvi Kapoor captioned the post saying, “lungi dance,” with a rose and a dancing lady emoticon. The post includes her pictures in a bikini, a blurry and bokeh boomerang while playing in the water, some silhouettes of herself and Khushi Kapoor enjoying the sunset, a still from her jet-skiing and a video of the same. Check it out here: Also Read – Karan Johar says ‘My lips are sealed’ when asked about Akshay Kumar taking over Dostana 2 after Kartik Aaryan’s ouster

Kiara Advani, Maheep Kapoor, Bhumi Pednekar all dropped fire emoticons on Janhvi’s post. Khushi Kapoor commented ‘wow’. Manish Malhotra was all hearts for the post. Fans, too, are loving the posts that Janhvi Kapoor has been sharing lately. Also Read – ‘Heartbreaking’ Janhvi Kapoor finally opens up on Dostana 2 with Kartik Aaryan getting derailed

On the work front, Janhvi has Dostana 2 in the pipeline. It stars Laksh Lalwani and Abhishek Bannerjee in the lead. Directed by Collin D’Cunha, Dostana 2 is produced by Hiroo Johar, Karan Johar and Apoorva Mehta under the banner of Dharma Productions. Earlier, the film was supposed to star Kartik Aryan. But the Dhamaka actor backed out due to creative differences. On than that, Janhvi Kapoor has Good Luck Jerry in her kitty. She will also be seen in Takht, an ensemble period drama by Karan Johar. However, the film has been delayed.