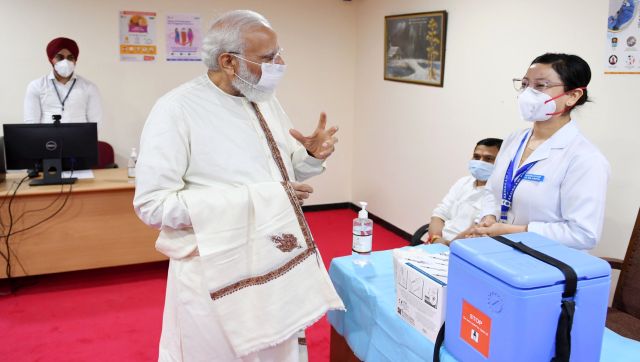 In an editorial for the Indian Express, the prime minister hailed the collective efforts of the nation — from scientists, to doctors, healthcare workers, the youth, social workers and religious leaders — and said that the 100-crore milestone showed that ‘democracy can deliver’

doses on 21 October, Prime Minister Narendra Modi took to penning down his thoughts on the vaccination drive in an editorial for the Indian Express.

In his article, Modi wrote that the drive, which is nine months in, has been a “journey from anxiety to assurance” and “thanks to the vaccination drive the nation has emerged stronger.”

In the article, Modi calls the inoculation drive a “bhagirath effort” and said that one of the main reasons for success of the campaign was the trust that people had developed in the vaccine and the process followed despite various efforts to create mistrust and panic.

He also spoke of the fact that India used ‘Made in India’ vaccines in reference to Bharat Biotech’s Covaxin and Serum Institute of India’s Covaxin — the major vaccine providers to the Indian population. He wrote, “There are some among us who only trust foreign brands, even for simple everyday necessities. However, when it came to something as crucial as the COVID-19

vaccine, the people of India unanimously trusted “Made in India” vaccines. This is a significant paradigm shift.”

The prime minister also stated that the COVID-19

vaccination drive was a prime example of what India could achieve if its citizens and government worked with a common goal in mind. He said that while some doubted the capabilities of 130 crore Indians, the people of the nation showed how “spectacular the results can be, if they are made trusted partners”.

Speaking of the vaccination drive and its ability to reach every nook and corner of the country, he praised health workers for that and said that whether it were hills or crossing rivers, the officials took to every difficult terrain to ensure that each person eligible for the vaccine got it.

He was also quick to hail the efforts of the youth, social workers, healthcare workers and social and religious leaders who helped in removing vaccine hesitancy among the public.

In his article, Modi also praises India’s scientists as he believes that if it wasn’t for their efforts to create a vaccine for the population of India, then it would have taken even longer. “Imagine the situation if India did not have its own vaccine. How would have India secured enough vaccines for such a large population and how many years would that have taken?”

He also appreciated the efforts of the vaccine manufacturers who scaled their efforts and also the supply chain, which ensured last-mile delivery of the vaccines.

He said if it wasn’t for the technology that India use, the vaccination drive wouldn’t be successful and complemeted the platform — CoWIN. “It also ensured that a poor worker could take the first dose in his village and the second dose of the same vaccine in the city where he works, after the required time interval. In addition to a real-time dashboard to boost transparency, the QR-coded certificates ensured verifiability. There are hardly any examples of such efforts not only in India but also the world.”

In conclusion, Prime Minister Narendra Modi said that the COVID-19

vaccination drive had shown the world the power of ‘Team India’ and also demonstrated that “democracy can deliver”.