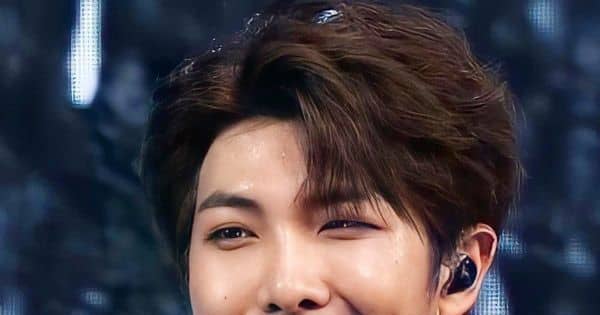 BTS members hardly interact with girls given how it sparks off toxic and unnecessary shipping, which can be harmful at many levels. This makes their few and far interactions with the opposite sex even more special. BTS front-man RM has always dealt with the dating questions with subtlety and class but there was one incident that left him a bit shy. RM was part of a music show along with Japanese singer, Yuiko. It seems he had to choose from a number of singers and he decided on her given her gorgeous vocals. The two put up a duet, a delightful performance on a heartbreak song that left the live audience in tears. Yuiko got a lot of love from the audience. Also Read – BTS member Jin’s dilemma over food is too relatable but ARMY is busy obsessing over his worldwide handsome looks in PJs [VIDEO]

Well, after the performance was over, Yuiko thanked RM for choosing her. Being a Japanese, she is quite fluent in Korean. But she ended up pronouncing word as Bpobpo, which means kiss in Korean. The whole sentence came across as “Thank You For Kissing Me,” instead of “Thank You For Choosing Me.” It was a small error but in left everyone in splits. RM handled the situation like a gentleman. He told her that it was ok that she goofed up, and did not make her too self-conscious. But even he could not control himself from blushing when the whole crew and audience laughed their hearts out at his expense. Adding to the chaos, the anchor addressed him as Kiss Monster instead of his past name Rap Monster, which is now RM. Also Read – It’s BTS V’s goofy charm v/s sexy HOT avatar! Vote for your favourite side of Kim Taehyung’s duality, ARMY

RM handled it quite well. The show was made by MBC Entertainment and RM had chosen Yuiko from a number of other singers. As part of the programme, he went to the airport to pick her up. Here is a link of the lovely song they crooned together on the show… Also Read – BTS: This new Korean actor’s uncanny resemblance to Jin leaves the ARMY pleasantly surprised – see pics

BTS is all set to perform in Los Angeles later this month. They will also perform on the Butter Remix with Megan Thee Stallion. RM aka Kim Namjoon as trending yesterday as he lost his audio files, which had a song he had made for over a year.