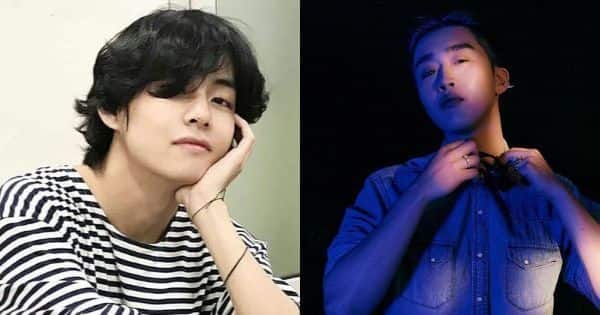 BTS member Kim Taehyung is a part of the much loved Wooga Squad. It has members like Park Seo Joon, Park Hyung-Sik, Choi Woo Shik and music producer and singer Peakboy. The boys’ friendship is very heart-warming. V has done the song, Snow Flower with Peakboy and it is one of his most beautiful individual projects. Some time back, Kim Taehyung told ARMYs that he was jealous of how they sent lyrics to Jungkook. All of us remember how Jungkook sang a song written by ARMY. It was a heart-melting moment. Kim Taehyung told fans that he would love it if they wrote lyrics for him too. He said he would ask the staff to sort them out for him, and work on a song that had some part of the lyrics by ARMY. V said that since he did not have his own studio, he did take help from his BFF and rapper-music producer Peakboy for the same. Also Read – BTS V CUTELY convinced Jungkook to cook breakfast for him in the latest episode of BTS in the Soop 2; TaeKook stans be ready to melt!

Well, Peakboy was doing an Insta live with his fans when people asked him about the number. He was said work on it was in progress. The number has been titled Purple Color. As we know, the colour purple and BTS have a special resonance. Kim Taehyung told fans to keep the theme of Purple Color/ I Purple You and pen the emotions on similar lines. He had once said that purple is the last colour of the rainbow, likewise he will love his fans till eternity. Every member of BTS Army old or new know what Borahae means! Also Read – 5 times BTS member Jungkook serenaded ARMY with stunning cover versions

Kim Taehyung gave us friendship goals when he featured in Peakboy’s track Gyopo Hairstyle. His look as a waiter in a purple tuxedo and bow tie was compared to that of Leonardo DiCaprio in Titanic. He was too cute in the video. Likewise, he made time for the anniversary celebrations of Paradise actor Choi Woo Shik. While he is busy as a bee with all work of BTS, Kim Taehyung never fails to make time for friends. Also Read – What? BTS leader RM once forgot to pull his zipper up on national television and no Army can imagine what happened next

BTS will be soon seen in Los Angeles performing at the AMAs followed by four concerts. Megan Thee Stallion is also joining them for the Butter Remix dance.