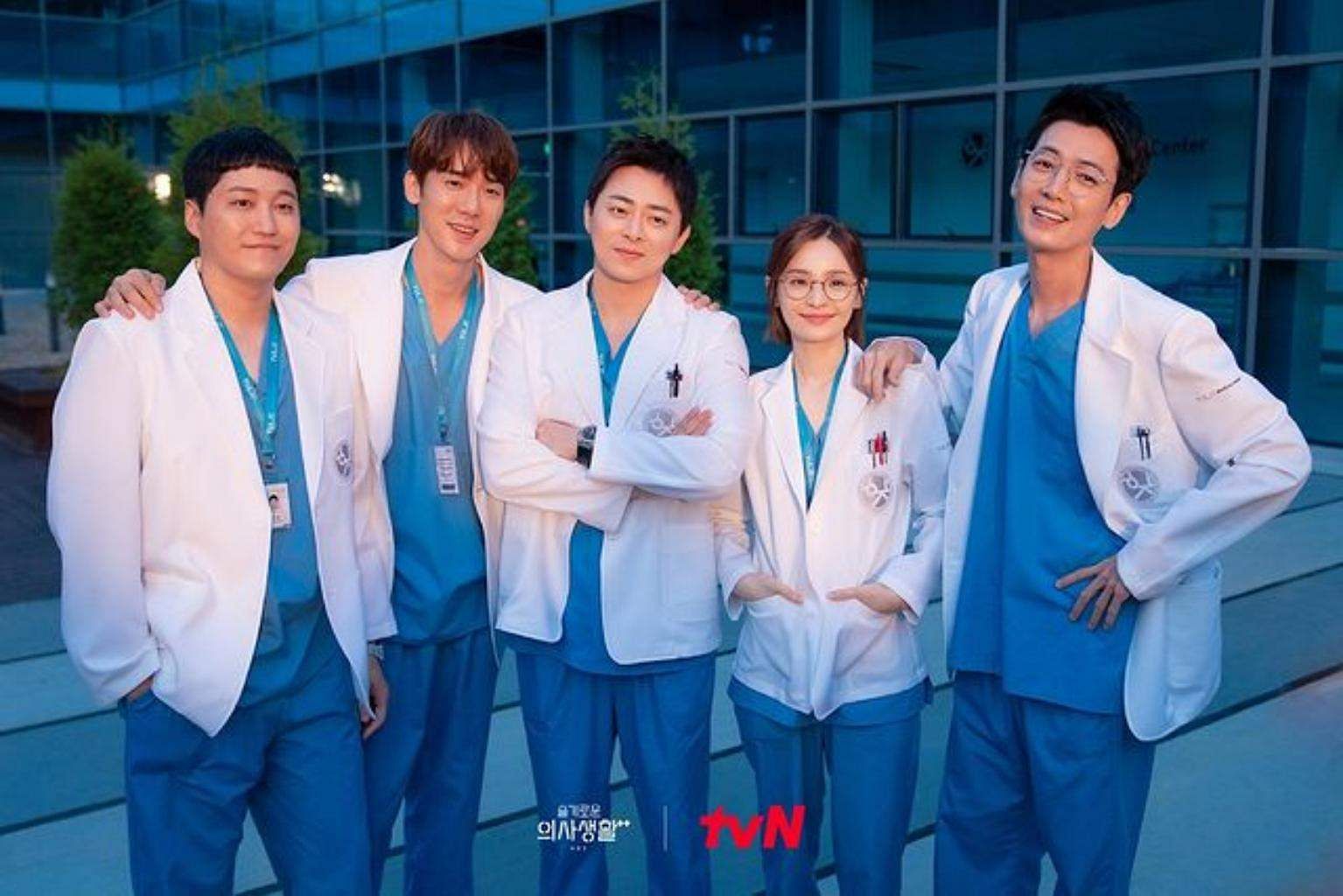 One of the most satisfying narrative devices that Hospital Playlist – streaming on Netflix – uses over its two seasons is holding back information, not by some form of suspense or mystery but by leaving scenes and events incomplete. When they occur, they don’t seem incomplete. We witness a tiny exchange, seemingly inconsequential, and then the story moves in a different direction while making sure that the shift is not disorienting, and the scene can exist by itself as part of the episode. But later, we get an extended version of the scene filling us in with more information that ties into another subplot, often tying up a loose end that we didn’t realize existed. It still manages to create a sense of longing for a character or a subplot, its denouement comforting us on a wet, cold night like only the best of Korean dramas can do.

Hospital Playlist comes from Reply series alumni Lee Woo-jung and Shin Won-ho. It’s about five talented, high achieving doctors in their early 40s –Lee Ik-jun (Jo Jung-suk), Ahn Jeong-won (Yoo Yeon-seok), Kim Jun-wan (Jung Kyung-ho), Yang Seok-hyeong (Kim Dae-myung) and Chae Song-hwa (Jeon Mi-do). The setup is miraculous and otherworldly. They went to the same college, they are terribly hard-working that it is painful to watch, at that age, they have found work in the same hospital; Yulje Medical Centre and they are immensely successful and almost never miss. The five have no business existing in such perfect unison. And the series doesn’t even come close to an inkling of a conflict within the group. The most aggressive they get with each other is over food. Sometimes Song-hwa’s singing ability or lack of it. Otherwise, they get each other, they give space to each other, and no one is ever nosy. Maybe except for Ik-jun but that’s his calling. So where do you find drama?

But deep down there is a reason for choosing to mine drama out of hospital patients and their families, the surgical procedures and treatments, and familial pressures and obligations over messing with the relationships and equations between the friends. When we meet them, their bond is fully formed and water-tight. They are not in their 20s or even early 30s like in a typical drama about a giggling gang of close-knit friends. These are adults in their 40s who can go crazy over food, form an embarrassingly average garage band or play cupid like they are in high school but still possess the maturity to leave each other alone to live their own lives. They are, to put it bluntly, too old for such puerile misgivings. So, they might tease Jun-wan about the woman he is seeing but never press for more details. They don’t try too hard to change Jeong-won’s mind about his future or that of Song-hwa when she makes a major career decision at the end of season one.

Over 24 episodes with some of them running longer than the average feature film, a single sequence of fewer than two minutes establish this wavelength. It’s the morning after Song-hwa hears some news about her health. We don’t get to hear the news itself but only see her more than usual peppy self – like she is camping alone during the weekend and not working in the hospital – ten minutes before her consultation time begins. We know it is good. Seok-hyeung opens the door, muted in his query, gets the information he was looking for, and leaves as quietly as he arrived with no change in his disposition before or after. Jeong-won can hide neither his empathy nor his worries, inquires, and leaves, not before infusing her office with some positivity. Jun-wan drops in like he was beamed up, unaware of how to go about it but by then Song-hwa knows what he is looking for. He responds with an “Ok” and cannot wait to get out of her sight and make it more awkward. Ik-jun of course arrives with coffee like it’s the usual morning. Because he already knew everything he needed to know.

Hospital Playlist focuses on the more dire aspects of life in and out of the hospital for its conflicts. Health issues, aging, physical and mental stress that comes with the territory, relationships, having children, or taking care of parents. Sure, it has some exposition, but it also makes us feel something for these characters who can be annoyingly perfect. Look closer and they are not perfect. Some lack communication skills, a few lack people skills. Some cannot separate their work from their life. The actual show is within the residents and interns, the parents, and the bosses. There is something to be said of a Korean drama that lets lives just be without having to redefine paradigms or teach the audience how to live and behave.