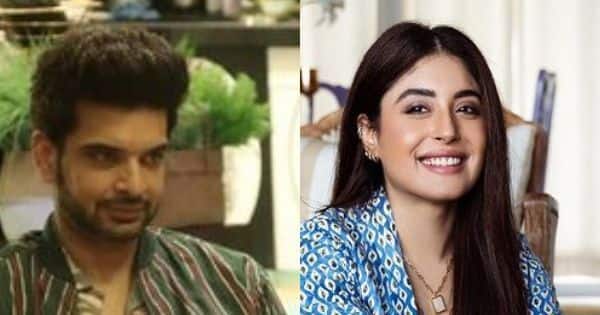 Bigg Boss 15 is being dominated by #TejRan. The camaraderie and blooming love between Karan Kundrra and Tejasswi Prakash is gaining a lot of attention. Fans also adore the two. In the middle of all this, Karan Kundrra remembered Kritika Kamra on her birthday. Indian TV fans adored them as Arjun and Aarohi on the show Kitni Mohabbat Hai. The show came out in 2009 but is loved till date. There were rumours of the two being in a relationship. Karan Kundrra and Kritika Kamra have always respected one another. The fact that he remembered her birthday touched the hearts of fans. He was telling Tejasswi Prakash that Kritika was the only girl who was younger to him. This is how people reacted on social media…. Also Read – Trending TV News Today: Shivangi Joshi’s tearful goodbye post, Shehnaaz Gill’s viral bridal video, Ieshaan Sehgaal-Rajiv Adatia’s nasty fight and more

#KaranKundrra says that all the girls he dated were elder to him except #kritikakamra . He still remembers her fondly I feel ?.

Marriage isn’t his priority but he wants to have kids
. #KaranIsTheBoss @OrmaxMedia #BB15 #BiggBoss15

He is seen telling Tejasswi Prakash that the women he dated in the past were elder to him except Kritika Kamra. He broke up with Anusha Dandekar a couple of years back. Earlier, Kritika Kamra had said, “There is no definite reason for my split with Karan. There was no fight. Both of us got very busy with our new shows and this took a toll on our relationship. Sadly, we couldn’t take care of our relationship. There was an emotional attachment, we were together 24/7, but he never proposed to me and I am glad he didn’t.” Now fans feel that though marriage is not a priority with him, he seems to love kids. Also Read – Bigg Boss 15: ‘I’m a straight guy,’ Ieshaan Sehgaal CLARIFIES during a nasty fight with Rajiv Adatia over Miesha Iyer