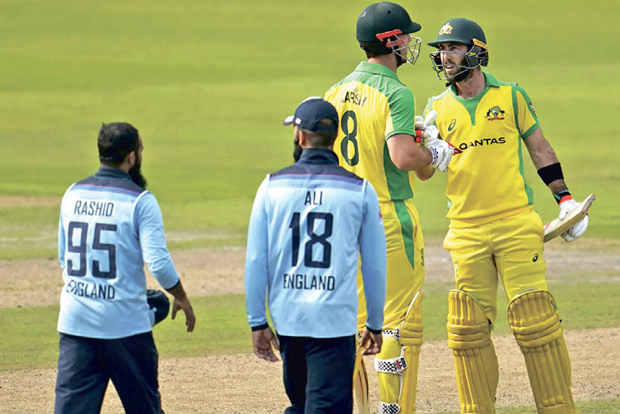 Australia lock horns with England in the 26th match of the ICC T20 World Cup 2021 on Saturday. Both sides are unbeaten in the tournament and would look to extend their dream run. England currently sits at the top of the Group1 table with 2 wins in 2 matches.

England played their first game against West Indies. Despite the absence of Jofra Archer, Mark Wood, and Ben Stokes, England bowled exceedingly well and, in fact, bundled out West Indies for just 55 runs in the first innings. Adil Rashid was the pick of the bowlers, claiming four for 2 in 2.2 overs.

Jos Buttler’s unbeaten 24-run knock ensured England chase down the score in 8.2 overs. This was followed by an 8-wicket win over Bangladesh in their second match. The bowlers were once again right on the money.

Moeen Ali opened the bowling for the side and sent both the openers back to the hut. Liam Livingstone then picked the important wickets of Mushfiqur Rahim and Mahmudullah before Tymal Mills picked three crucial wickets in the death overs.

Wickets at regular intervals never allowed Bangladesh to gain any momentum. And as a result of that, they managed only 124 runs in the first innings. The second innings saw Jason Roy play a blistering 61-run knock-off of 38 balls, including 5 fours and 3 sixes. Courtesy of that, England chased down the score in just 14.1 overs.

Facing them are Australia, who have also played wonderfully in the ongoing competition. Australia are coming into the contest on the back of two consecutive wins in the Super 12s. They played their last game against Sri Lanka on Thursday at Dubai International Cricket Stadium.

Kusal Perera and Charith Asalanka helped Sri Lanka get a good start. Sri Lanka had lost only one wicket in the first nine overs and scored runs at 7 per over.

However, Mitchell Starc and Adam Zampa picked four wickets between each other in the space of four overs to bring Australia back into the contest. Sri Lanka, as a result of that, failed to get capitalized on the start in the middle overs. As a result, they managed to score 154 runs on a good batting surface of Dubai.

Much to the delight of Australian fans, both Warner and Finch returned to form with impressive knocks at the top of the order. The duo gave the side an outstanding start, sharing a 70-run stand for the opening wicket.

Finch got out after scoring 37 off 23 balls, however, Warner went on to score 65 off 42 balls. Later, Steve Smith (28 off 26) and Marus Stoinis (16 off 7) remained unbeaten to guide the team home in the end. Ahead of their third game against England, they would look to extend the winning run.