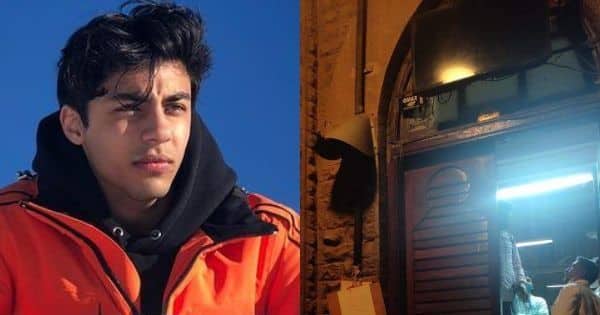 The bail hearing of Aryan Khan dominated headlines all over. Shah Rukh Khan’s son has been in judicial custody from October 2, 2021. His bail proceedings are now on in Bombay High Court. He is being represented by the former Additional Solicitor General of India, Mukul Rohatgi. The legal team also includes experts from Karanjawala and Sons, Delhi. It seems the courtroom got over crowded at the time of the hearing. The media was present in full strength for the hearing. The case was being heard by Justice NW Sambre and he left the dais for some time to let the cops clear out the space. Also Read – Trending Entertainment News Today: SRK’s son Aryan Khan may not get bail on Wednesday as well; KRK says NCB could arrest Ananya Panday and more

Now, a picture has surfaced where we can see the door of the courtroom being repaired at night. It seems it broke due to the pandemonium. The courtroom is on the first floor of the High Court building and was full of lawyers and reporters. Aryan Khan’s case was No. 57. Seeing the huge crowd, the Justice told his staff to clear out lawyers who did not have any urgent matter at that time. He reportedly said, “Covid-19 safety protocols are not being followed in this crowd. We need to follow the SOP (standard operating procedure).” Also Read – Aryan Khan may not get bail even tomorrow: Celeb numerologist’s shocking prediction for Shah Rukh Khan’s son [Exclusive]

It seems lawyers and media personnel were asked to leave. Later, they brought in the media when Sambre resumed his chair. There was chaos at 4 pm as a huge number of crowd gathered to hear the case. It seems Mukul Rohatgi had to take pauses in his arguments due to the noise. The latch of the courtroom door broke in this mess. Also Read – ‘NCB could arrest Ananya Panday, she should not go to their office till Aryan Khan’s bail’; advises KRK

Later, the cops cleared the bystanders from the room. The crowds made it difficult for junior lawyers and clerks to enter the court. As we know, Satish Maneshinde and Amit Desai also had their teams with them. The judge’s entry and exit space was given to the clerks to bring the case papers.