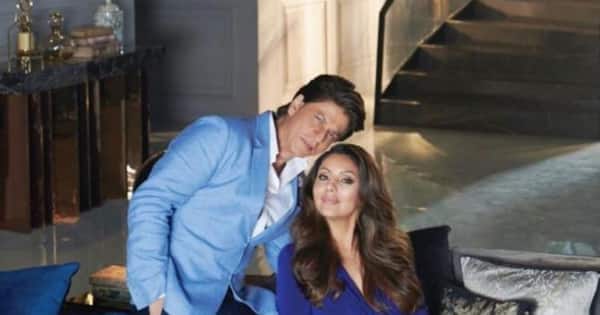 Shah Rukh Khan and Gauri Khan have spent quite harrowing past weeks with their son Aryan Khan in custody. Today, as their Prince and firstborn is back home, joy has returned to Mannat. It can be recalled that following Aryan’s arrest by the NCB on October 3 in the drugs case, a few of their friend from the film fraternity had visited Mannat to show their solidarity with the family. However, Shah Rukh and his team had issued a request to all to not come to Mannat due to security concerns. Also Read – Aryan Khan bail: Check out Shah Rukh Khan, Gauri, Suhana, AbRam, Pooja Dadlani’s First Reactions to the news of Aryan coming home

During this time, they had also kept busy, especially Shah Rukh, who was with the legal team at all times, finding ways to bring their son home from jail. They kept their interaction with friends and family to quick phone calls and texts messages. However, now with Aryan Khan home, Shah Rukh and Gauri have now once again opened the doors to Mannat for friends. Also Read – Inconsolable Gauri Khan stopped eating, sleepless Shah Rukh Khan only survived on coffee: Heart-breaking details of what happened at Mannat the 28 days Aryan was away

A source close to the family tells BollywoodLife, “The family has been through a lot during the past few weeks. But they know that their friends have been concerned. There was a continuous inflow of calls and messages during this time and this is just SRK and Gauri’s way of acknowledging all the love and support that their friends have powered them within their most difficult time.” Also Read – Not just Shah Rukh Khan’s manager – Pooja Dadlani also plays these important roles in Gauri, Aryan, Suhana, AbRam’s lives – view pics

Aryan Khan spent 28 days in custody and 23 days in jail. He has been granted conditional bail by the Bombay High Court and it has 14 conditions that Aryan has to adhere to. Failing which, NCB will be able to request for cancellation of the same.