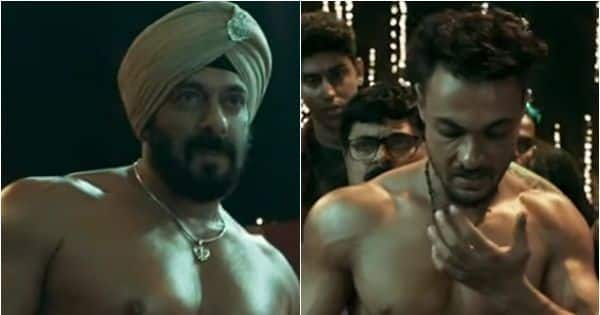 The excitement over the Salman Khan and Aayush Sharma starrer Antim: The Final Truth is reaching new levels with each passing day. The audience, who are eagerly waiting for the film, were in for a sweet surprise as Salman Khan released the official trailer of his action packed film online. And it seems like Salman and Aayush’s police vs gangster drama has already struck the right chord with moviegoers. Also Read – Antim: The Final Truth Trailer – Salman Khan and Aayush Sharma’s fierce avatars and terrific action to put box office slumber to an end

After introducing audience to their respective strengths and doings, the trailer gives a glimpse of a massive face-off between the two characters where both Salman and Aayush are seen going shirtless during their fist fight. Their performances look promising and it remains to be seen how many different layers of the characters, both Salman and Aayush, manage to bring alive on the screen. Other supporting actors such as Mahima Makwana, Mahesh Manjrekar, Sayaji Shinde and others also make their presence worthwhile. The background score of the film adds to the extravagant drama that is going to unfold on the big screen on November 26. Also Read – Not Ayush Sharma, it’s going to be Salman Khan vs John Abraham at the box office as Antim and Satyameva Jayate 2 get ready to clash

Fans have been going gaga over the Antim trailer and calling it a surprise package that will explode at the box office. While some are saying that the movie will be a good value for their money, some are predicting that it will be see a whistle-blowing mass masala entertainer.

2 things really worked for me..

Saw #AntimTrailer ,As a fan I’m so happy to see d way #SalmanKhan hs been presented, He Looks Exuberant as a Sikh cop. #AayushSharma looks Dreaded as a Gangster..His journey has been showcased pretty well.
Can’t wait to witness d magic of Megastar Salman khan on Big screen!?? pic.twitter.com/qoldPZwQqL

From power-packed action to stunning screen presence of #SalmanKhan & #AyushSharma with outstanding BGM, #AntimTrailer is giving all the Blockbuster vibes..? pic.twitter.com/zeTSa8OpU2

What a bombastic trailer !!
Got Goosebumps Salman khan as a serious cop always shines??.
His dialogue delivery>>>>>>>>.
Aayush sharma also looking good..
This will surprise all.
Will be my first movie in theatre after Pandemic ????
Rating-5/5#AntimTrailer pic.twitter.com/mmpVTdRDvP

Antim: The Final Truth is a story about the deadly struggle between a gangster played by Aayush who looks to expand and rule over his territory without anyone’s intervention until a cop essayed by Salman gets in the former’s way. Salman’s character of Rajveer is determined to put an end to gangster’s rise and rule, and for that he can go to any lengths.

Starring Salman Khan, Aayush Sharma and Mahima Makwana, Antim: The Final Truth is directed by Mahesh Manjrekar, produced by Salman Khan and is presented by Salman Khan Films. The film is set to hit the theatres worldwide on November 26, 2021.