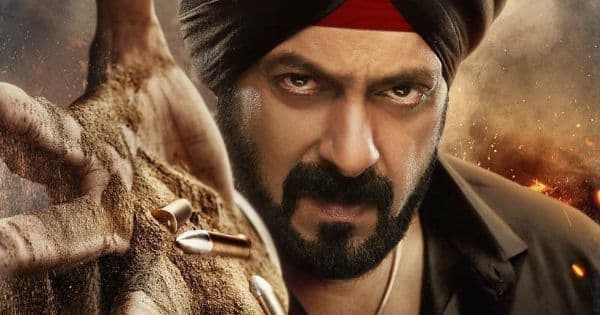 Antim: The Final Truth, starting Aayush Sharma and Salman Khan, was launched today, 25th October, at Bandra Kurla Complex (BKC) amidst a huge event, where the media, and of course, Bhaijaan’s fans, turned up with a vengeance. Also present were the film’s leading lady, Mahima Makwana and Director Mahesh Manjrekar. Thankfully, it seems like the Antim trailer had created just the necessary impact to provide the stimulant needed for both Salman Khan fans and the family audience in general to return to theatres in full force. Also Read – Salman Khan twins with Iulia Vantur at Antim costar Aayush Sharma’s birthday party – is something brewing again? Watch video

However, the one thing that may be slightly bothering both Bhai fans as also the trade is how good an opening Antim will take at the box office and would it be as good as what one expects from a Salman Khan movie? Apparently, not, and that’s not something to worry about much either according to Salman himself. Also Read – Trending Entertainment News Today: Aryan Khan case ‘witness’ Kiran Gosavi to surrender; Saif Ali Khan won’t be able to give a penny from his Rs 5000-crore property to sons and more

Opening up about how the trade needs to alter their expectations post two lockdowns and what would be the new normal, Salman Khan said, “What used to be the opening (for his films) expect 50 or even 60% less of that. The trade and everybody will have to temper their expectations. Things have changed a lot and we have to set new benchmarks. What was considered a normal opening for any kind of film, take half of that now. But, if people start coming (to theatres) then we could also expect things to gradually pick up.” Also Read – Antim trailer: Salman Khan opens up on theatrical vs OTT releases; says, ‘You can’t enjoy a film the same way on a laptop or phone’

Antim: The Final Truth releases 26th November in theatres all over India, including Maharashtra.